A motorcycle can be a huge part of a family story & carry a lifetime of memories.

To some a motorcycle is a simple means of transport, but to many others a motorcycle can represent a lifetime of memories, carry huge emotions & have such a special place in a family.

Over the past few years, we have helped some families to bring their motorcycle memories back to life & have supported others to keep their beloved machines on the road.

Here are a few of those stories.

Katy’s Grandfather was a despatch rider in WW2 & most likely rode a BSA M20 350.

“Grandad would deliver important letters & documents all over the country during WW2. One night as he rode over a bridge, a bomb went off right next to him sending him hurtling through the air. Thankfully he wasn’t injured & once the bike was repaired, he was back supporting the war effort.

When my great Aunt Diane was being born, the army wouldn’t let him have time off to be with my Nan & welcome his first born into the world. Therefore, whilst on despatches, Grandad took a detour & in full battle fatigues, traipsed into the hospital, held his first born & then went off into the night, continuing to support the war effort.

Grandad was a biker (runs in the family) & Mum has told me tales of when they, Grandad, Nan & their three children, would all bundle into the bike & sidecar & go off on adventures together & sometimes even head off on holiday.

Grandad owned a BSA C10 & although the exact story has been lost in history, it seized up & got left in the back of the family garage.

Grandad never got a chance to restore the BSA himself, as sadly he was killed in a car accident when I was only 7 years old.

Therefore, the BSA has sat in family garages for over 40 years & when Daniel & I started mono motorcycles together, Dad asked Daniel if he could help him restore the bike.

Thus far, we have stripped the bike down & our plan is to further the engine onto Jim Brown, a local BSA specialist, to restore & rebuild the engine. From there on in, we will restore the frame, wheels, seat & tank.

Getting this bike restored, running & taking her to classic bike shows; will be our way of seeing my grandfather’s legacy live again.” 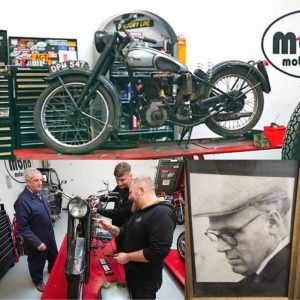 In 2019 we welcomed a lovely little part of local family story. The bright yellow Yamaha Passola belonged to our customer in her youth. As she outgrew it, the Passola was tucked away at the back of her dad’s garage.

30 years later & now a mother of a teenage daughter of an age where a lovely little Passola would be of great benefit; the Passola was brought out of retirement.

Our customers dad having added some fuel, managed, after all these years to start the Passola. However, they couldn’t get it to run.

With some fettling & repairs, new tyres, a thorough service & a new MOT; the owner, who rode the Passola in her youth, prepared to gift it to her daughter, who is now old enough to ride. Such a lovely family story. 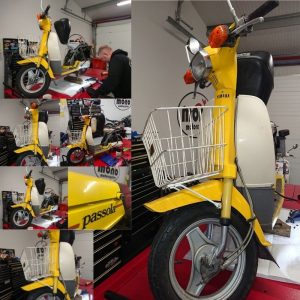 The 1977 Kawasaki Z650 belonged to our customers father who has passed away. Our customer & his brother want to keep the Z650 on the road & in doing so, keep their fathers memories alive.

Having arrived at the mono motorcycles workshop with no spark, Daniel discovered the points setting was not correct & in collaboration with a couple of broken wires at the coil, it was creating a no spark.

Under further investigation, Daniel also discovered that the points condenser had failed.

With parts on order, we will now get the Z650 up & running, sort the rear light wiring we have also been asked to look at & return the beloved bike to the family. 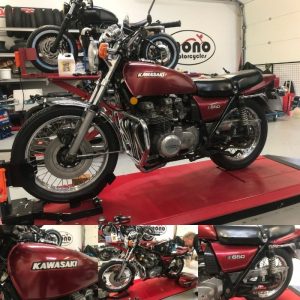 We met our Norton owner in 2018 & were amazed that he had owned the bike from new. Here’s what he had to say about the journey he has gone on with the Norton Commando & why the bike means so very much to him.

“I bought my Norton Commando at the age of 22 (1972). I had had my eye on her for a year & was eventually able to buy her with an annuity left to me by an Aunt. The Norton cost me £600 including tax & a pair of boots; about the same price as I could’ve bought a new Mini for at that time! I was entitled to a service after the first thousand miles. I completed this in seven days. 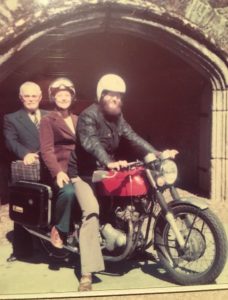 Later that year I set off with a girl & camping gear on the back heading for the Munich Olympic Games. My only spares were cables which were taped on to the others ready to exchange. During that over 3000 mile holiday, I only needed to put in one new clutch cable.

I travelled through France, Germany, Lichtenstein & Italy & climbed over Saint Bernadino’s pass ( which caused some breathing problems for the Norton at the time) ! Back in the day, riding the Norton you felt like you were Lord of all you surveyed.

I had a few adventures on the way. For example, I came into a campsite in Italy late one night & it was very stormy & almost completely black. So, I put the tent up using my trusty lump hammer, hammering pegs into very hard ground. During the night I heard people having to re-pitch tents all around me in the pouring rain, I lay there feeling pretty smug that I didn’t feel the need to.

However, in the morning the truth became known. As I woke up somebody was hooting a horn. I crawled out of the tent & found a car wanting to pass. In the near dark of the previous evening, I had managed to pitch the tent on the road!

The Norton has not been without her problems during our time together. The big end bearing went & were thankfully replaced under warranty by Super Blend Bearings. At one stage the Norton was kicking out smoke. Under investigation, I found that the bore of the cylinders had gone oval!

For a number of years I used to regularly travel from Portsmouth to Lowestoft. It was pretty cold in winter & you had to immerse your hands & feet in cold water not hot upon arrival, or it was exceedingly painful. The longest trip I took in one day was over 400 miles from Lowestoft to Foil in Cornwall. The ride took eight hours including breaks & was pretty tiring. I slept for 12 hours that night.

Of course you always want to see how fast a motorcycle will go, being young & stupid. I took the Norton up to 115, but with no fairing & an open face helmet, I couldn’t hold on to the bike at that speed and so that was the fastest it ever went. 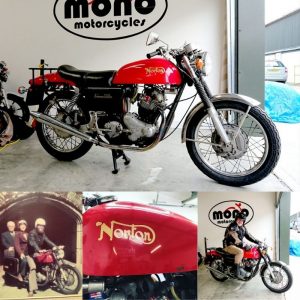 Back in the early 1970s if you travelled at high speed, nobody much overtook you & if you found a Rocket Three or a Trident & had a burn with it, you felt like gods!

There were even a couple of police riders in the NOC (Norton Owners Club) who would give you a burn if there wasn’t much on the road, but woe betide you if you went over the limit outside a school etc.

I’ve ridden many tours on the Norton, particularly up to the northwest coast of Scotland & a couple in Ireland. Apart from punctures both front & rear, which I mended by the side of the road, I’ve only been stranded twice that I remember. Once when I lost the spring clip from the drive chain & once in Edinburgh when I eventually found the electronic ignition box gave up the ghost.

Of all the many adventures & stories to tell, one of the ones which makes me chuckle revolves around a pal who often rode pillion. I remember stopping at traffic lights in Petworth one day & as he often put his foot down, I didn’t bother. As we pulled away I thanked him for holding the bike. He said ‘I didn’t put my foot down, didn’t you?” I imagine that looked pretty alarming from behind!

The Norton has been a big part of my life & I look forward to continuing to ride it in 2022, 50 years after buying it.” 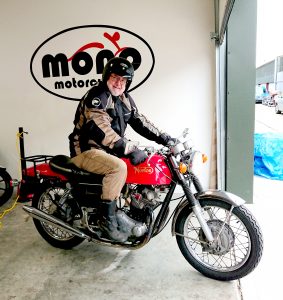