This week we have seen some smaller cc motorcycles & two strokes come through our doors. The classic motorcycle theme continued, with the Honda 500 Four.

We started the week with a day on the Ducati 998 restoration. We are really close to completion now as we just finished off the wiring & cranked the motor to bring the oil pressure up. We are just waiting for a few additional pats to arrive & hopefully it will be time to get it running.

We have recently been lucky enough to work on some very unique classic motorcycles at mono motorcycles.  A stunning Yamaha FS1E restored a few years ago to a very high standard, has been a great addition to the mono motorcycles portfolio. Likewise the  early Vespa, which accompanied it. Both of these motorcycles came to us through Route67 & the instructions were to get them both running & then drain all the fluids out as they are off to a private collector. 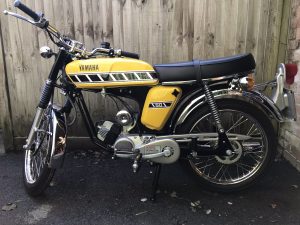 The first job was to drain the fuel tanks of both motorcycles.

Upon inspection, the Vespa fuel tank was badly corroded inside & full of rust. We then removed the carb & gave it a good clean before refitting, but to a remote fuel tank pre-mixed with two stroke oil. After removing the plug & giving the kick start a prod, it revealed a nice blue spark. Perfect. Two kicks later & it was running. Sounding crisp we were keen to start work on  the little Yamaha.

The Yamaha FS1E has a special place in the history of mono motorcycles,as I owned one when I was 16. At the time I had a RM250 motor cross bike, TY175 trials bike & had been riding 9 years, so although my ‘fizzy’ was capable of 60+mph it felt slow as a donkey. Despite this I loved my ‘fizzy’, with its Micron exhaust & drop bars I thought I looked fantastic!

As always every bike we get in from Route67 is spotless & the Yamaha FS1E was no exception. Again we drained the tank, cleaned the carb & checked for spark. A bit of premix & it was running.

Once the Yamaha FS1E & the Vespa had both been run for 15 mins, it was out with the fluids & packing them up ready for delivery.

To continue the classic theme this week,  we have had one of  our regular customers Honda 500 Four in for a charging fault.

We previously discovered that the stator was in a shocking state. The customer managed to find a very good condition one. It was a straight forward swap over & while I was under the casing, I installed a new neutral switch.

Running the Honda up and checking through the wiring, I found a high resistance in the loom near to the starter solenoid. This was creating a 0.5v drop through the wiring resulting on a low charge rate at the battery. 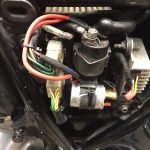 This may not sound like much, but when a motorcycle is on tick over, it’s only just charging especially on older machines. If you then switch the lights on it would be running on the battery reserve until the battery goes flat, resulting in a motorcycle that then won’t start! 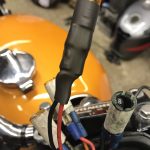 First step is to “tin” the wires (coat in solider), then before I fit the crimp I add a small piece of heat shrink.

Removing & replacing the wire, I made up a new loom and fuse & the  voltage returned. Moving to the front of the motorcycle, some of the dash lights didn’t work. When the the bulb holders were removed, we found out why. Crimp terminals! Don’t get me wrong there is nothing wrong with crimp terminals, but on motorcycles you need to go a step further if you want them to last. First step is to “tin” the wires (coat in solider), then before I fit the crimp I add a small piece of heat shrink. I then crimp an end on before heat shrinking to keep the damp out. To avoid the crimps getting pulled off on installation, I added heat shrink further down the wire to hold it. Job done. It was worth the extra time to get it all done right. 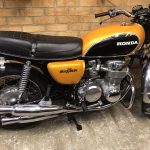 For all your classic or modern motorcycle wiring, restoration, modification, detailing, service & repair needs, please do contact Daniel Morris – Proprietor & Master Technician on 07899 654446 or through our contact page.