Daniel & Katy are the driving force behind mono motorcycles. Here is their story so far.

We are both petrol heads through & through. We have both been brought up on a diet of Castrol R, motorbike & car racing, F1, MotoGP, BSB, classic bikes & cars, fast cars, superbikes…the list is endless.

But who are we, what is our background & how did come to be running mono motorcycles together.

Here is a little more about us. 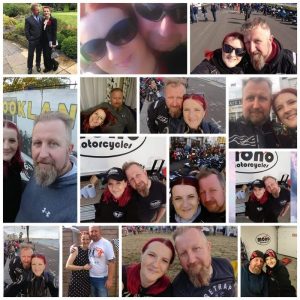 “Motorbikes have played a massive part in my life. From the tender age of seven I was part of a display team called The Wasps Motorcycle Display Team & cut my biking teeth on a Yamaha TY80.

From this very tender age I began fixing & repairing motorcycles. As I grew, I began fixing my friends bikes too & my skills & understanding just grew & grew. 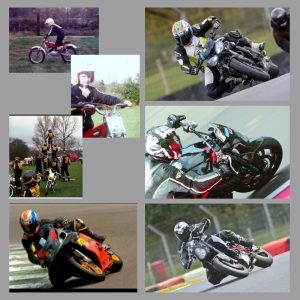 Following a mechanic apprenticeship at 16, I worked in several garages & dealerships, moving my way up to team management & supervisory roles.

Despite working on cars as a seasoned mechanic, I continued to own a wide variety of motorcycles & repaired them or modified them throughout the years.

With 20 years’ experience in the motor trade to my name, in 2007 I joined the AA as a roadside patrol. After 2 years on the road, I joined the TSP team (Technical Support Team) & my knowledge & understanding of wring & electrical fault diagnosis really came into it’s own.

After 10 years working for the AA, I knew it was time to make a change. I had met Katy & as a fellow petrol head, I wanted to be able to spend more time with her & experience our mutual passion for all things fast. It was with Katy’s support & that of family & friends that I made the leap early in 2017 to move my passion for motorcycles into a full-time business & mono motorcycles was born.” 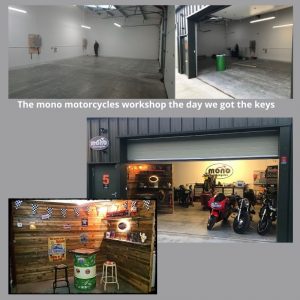 “I have grown up with the smell of Castrol R all around me. As a child my Dad, the then Chief Marshall at Cheltenham Motor Club, would take my family to race meets regularly. I grew up with the snarl of two strokes, sidecar outfits, all manner of race cars & motorcycles all around me & I loved it!

It was never on my radar to be involved in the running of a motorcycle business as I was growing up & although my ultimate passion was & still is for all things fast & loud; my career paths have been varied.

After graduating from University (1995) I couldn’t settle on one career, but by default, ended up spending many years in Purchasing & Logistics.

It wasn’t until 2009 that I finally took the plunge & commenced a Post Graduate Certificate in Education, something I had wanted to do since my University Graduation, but had never had access to the funding.

Having Graduated as a Secondary School English Teacher, I then spent nearly 10 years in education. Sometimes it was amazing & I Ioved my job. Some of the children were incredible & some were unbelievably challenging.

Sadly, like so many of the other people I did my PGCE with, after nearly 10 years in Secondary Education I was worn down, stressed beyond belief & I knew it was time to move on.” 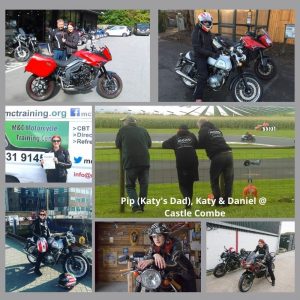 So where & how did we meet? Well, we actually met online on a dating App!

Katy had moved to Worthing in January 2016 to take up a role as Second in Charge of an English Department at a boys school. We were both very busy people & took the plunge to go on the dating app having been encouraged by well-meaning friends.

Daniel: “I was scrolling through the potential matches on the 9th February 2016 when all of sudden this flame haired woman appeared in my feed. I started to read her profile which included that she was a lifelong petrol head & hated shopping. I had to get to know this woman.”

Katy: “I have always thought how incredibly brave it was for Daniel to reach out to me. We started to chat online & wanted to meet as soon as we realized we had many mutual interests. However, as Valentines day approached, we both realized we had tickets to the Carole Nash ExCel Motorcycle Show on opposing days. I was going with my Dad & Daniel the day before me with his brother”

Daniel: “When we met, I still had my KTM 990 Superduke & I remember putting a post on Facebook saying I (heart) KT M, obviously not writing about my bike, but this amazing woman I’d met – Katy Mason (KT M)”

Katy: “Our first date was a sedate one, in a public space for safety, LOL! We talked for hours, laying our lives out in all their technicolor glory & agreed to meet a few days later to go out on the bike. Well, the first day I got to be pillion on the Superduke was hilarious as I decided despite the advice of the weather report, to not wear my waterproofs. With no rear mudguard I got absolutely soaked! How romantic.

However, the start of our relationship & our future relationship was to be tested very soon after we met. Three weeks after we met, we were meant to be going on a mini break & I remember turning on my phone at the end of a particularly busy Friday to find a message from Daniel’s brother telling me he’d had an “off”

My heart sank. I managed to get hold of Daniel through his work phone & it was not good news. Having hit a patch of black ice on the Superduke, Daniel had crashed, smashed his shoulder, snapped his arm just under the shoulder socket, taken all the skin off his knees, broken his thumb & was in a very bad way. This was 3 weeks into our relationship.” 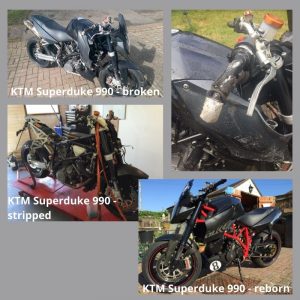 Daniel: “After the accident, I was on a lot of pain killers & naturally I was worried that Katy having only just met me, might think I was a liability & end it then. However, she stayed.

I started the long road to recovery with Katy by my side & within a few short months we knew we wanted to be together full time & began making plans to move in together.”

Katy: “I knew Daniel was ‘the one’ despite him being a broken ‘one’! Once we had moved in together & he then left the AA to start mono motorcycles; I supported him while he built the business from our garage at home.

In January 2018 having been signed off from teaching again with stress, I decided enough was enough & I left the teaching profession. I started at mono motorcycles full time, developing the social media coverage, adding blogs each week to the website, attending trade events & completing all of the admin functions.”

Daniel & Katy: “Since we have been together we have experienced some highs & lows, but the most important thing is, is that we have been there for each other & waded our way through the tough times & rejoiced in the good times together.” 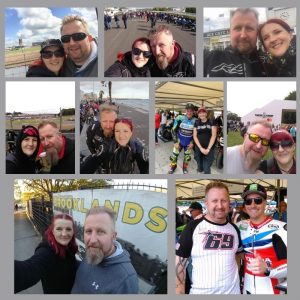 Our vision for mono motorcycles in 2022 & beyond

Over the years the mono motorcycles workload has been varied & diverse, with motorcycles of all ages & CC’s coming through our doors.

The Covid19 pandemic started just as we were building our reputation as one of the leading motorcycle wiring specialists in the UK.

Obviously, over the past couple of years things have been challenging & at times we honestly did not know if we would make it out the other side.

However, as we come into 2022, we have changed our portfolio to focus on motorcycle wiring primarily for the custom bike scene & to become known as the premier motorcycle service provider in West Sussex & Hampshire.

We have plenty of changes planned for the mono motorcycles website & moving into eCommerce options. Watch this space!

Our ever popular Breakfast Clubs will return from April to October & we are super excited to be hosting our first Custom Bike Show on Sunday 12th June.

Running a business takes a lot of dedication & it is a challenge not to be consumed by it. As mono motorcycles has grown, so to has our ability to offer a bespoke customer experience, offering a cumulative 35 years of knowledge, skills & expertise to everything we do.

When it is your own business, it is like having another child. You want to see it grow happily & safely. If it is harmed, it hurts you personally & no matter how tough a thick skin you grow, it still smarts.

However, running your own business can be liberating & with the right skills, a can-do attitude & the right people around you; it can flourish.

Here’s to many many more years of mono motorcycles. Check out our social media feeds & website updates & join us on our journey.

All the very best, Daniel & Katy 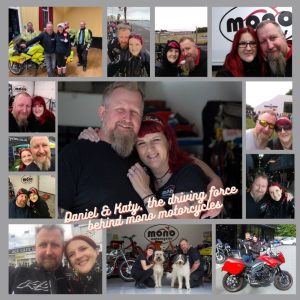