As we begin to wind down for a short festive break, we are completing some over hanging projects. We are still welcoming our booked work & as of time of writing we are currently booking into March 2021 already!

If you are considering getting your bike serviced, we are recommending booking in advance for 2021 as we feel it will be a busy year.

On Monday we had a catch up day, but on Tuesday it was all hands to the pump as we began to catch up with some of our project work.

The Ducati Monster 900 which we recommissioned after being sat for 5 years, re-joined us for some snagging issues.

When we first welcomed the Ducati many of the pipes had degraded, the fuel had turned sticky & the carbs were not in a good way. Despite meticulous cleaning, it had been discovered that the fuel filter pipe had collapsed due to age & sent miniscule particles of rubber through the fuelling system.

Therefore, it had been decided in the first round of repairs to bring the Ducati back in & replace all carb parts & put a Dynojet kit in.

The parts came in from the USA for the Ducati Monster & Daniel replaced every part, meaning that the entire carbs had been replaced, except the carb body. 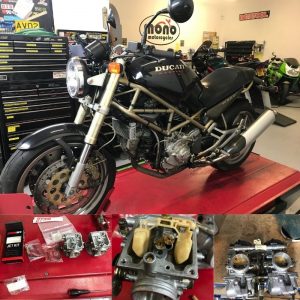 Also, on the ramp today we welcomed back the Yamaha XJ900 for the completion of the mechanical build.

Daniel initially spent 40 minutes pulling brake fluid through brand new lines & bled the system to ensure the brakes are bedded in correctly. Finding that the performance was a little ‘fluffy’, he decided to remove the carbs. Upon removal he found that the diaphragms had been pinched when they had been put together by whoever built them & this could have been allowing air into the carb housing. The XJ is now running better, but still has a flat spot in the mid range. We will await our customers instructions in how to proceed further. 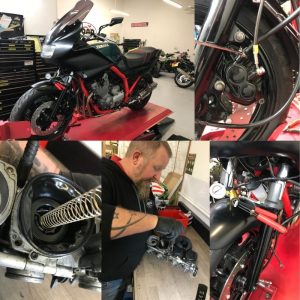 On Wednesday we welcomed a very clean Kawasaki KH400.

The KH has a few issues which manifest themselves in the bike running for about 15 minutes & then cutting out. Having been elsewhere & having numerous works undertaken; we welcomed the KH with a fresh set of eyes & in Daniels’ initial assessments he discovered:

All of these issues can add up to make the performance of any bike misbehave, let alone a 2 stroke!

Next stop, Daniel will take a look at the wiring loom to ascertain if there is anything glaringly obvious which could be causing the cut out & back fire. 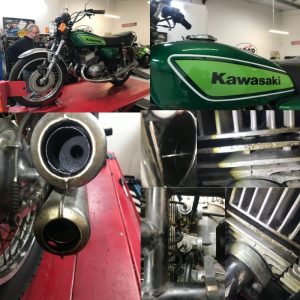 In the afternoon Daniel fired up the Ducati Monster 900, took her for a ride & she is now running perfectly. Some adjustments needed while she was hot & now she has gone home.

Up on the ramp on Thursday we welcomed back the 7/11 for some more work.

In the first round of works, the running issues might have been down to the valve clearances having been too tight. Therefore, the 7/11 underwent a valve check & low & behold, several of them were so tight, Daniel couldn’t get the smallest gauge in to check. They have all been adjusted correctly & we are now waiting a break in the weather to test ride. 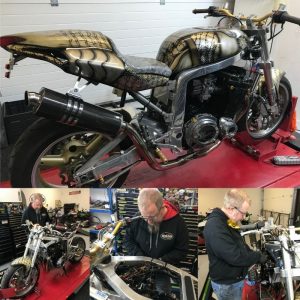 The Yamaha TTR250 which belongs to one of our long term customers, came to us with some starting issues. Our customer had rebuilt the ignition twice, thinking the ‘click’ he heard was inside.

Once Daniel had tested the power outputs, it was discovered that there was no power from the starter solenoid. One this had been replaced, the TTR started first time. 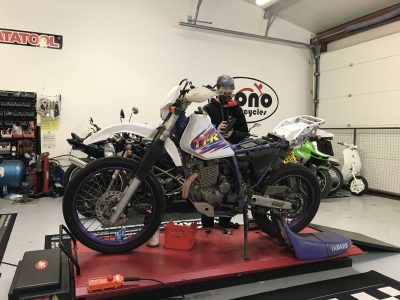 We also welcomed back the Pan European on Thursday for a full calliper strip down & seal replacement. 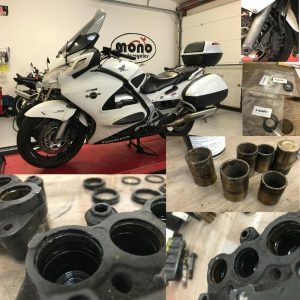 Nathan is making great progress with us & is learning all the time. Daniel loves having him working alongside him & looks forward to developing his skills as we move forward. 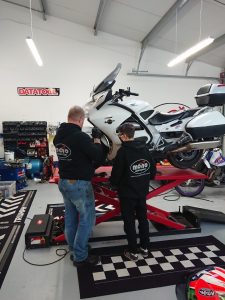 As mentioned above, we are booking quite far ahead into 2021 already. Therefore, if you are seeking to book your motorcycle in for servicing, then please do contact us as early as you can in the new year, to secure a booking slot for spring.