On Monday we commenced the building of our latest Honda eCub the ‘elekTrik9T’. The eCub is based on the popular Honda C90 Cub, which is the most manufactured motorcycle ever, with the Honda Super Cub now having reached the 100 million mark!

We began our journey into electrification in the Summer of 2019 when we were chatting to our web designer about building him a motor bike, but he wanted something a little different. He showed us a picture of the Dues ex Machina Honda Cub ‘Seasider’

A week later he sent me a picture of what we now know as a ‘Shanghai Customs eCub’ & we are now on our third build, with our brand name the ‘elekTrik9TTM’ 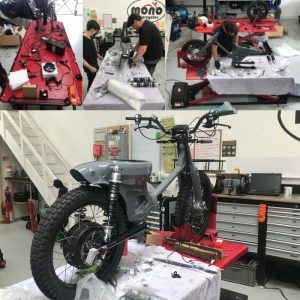 On Tuesday we welcomed back ‘Bella’ the Honda NC750x. Like so many of our customers motorcycles, Bella has not been ridden much in the past 16 months, but she joined us on Tuesday for some new shoes, chain & sprockets & an arranged MOT to get her back on the road & enjoying the summer sunshine 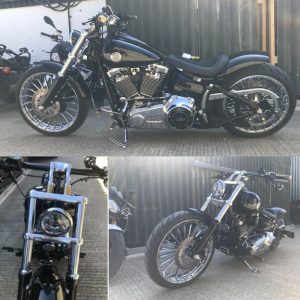 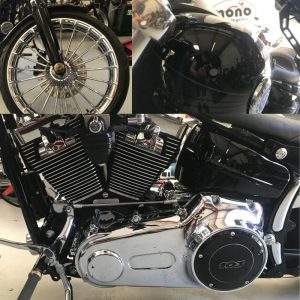 On Wednesday Daniel completed a full carb strip down ready for cleaning on the Yamaha XS1000 Chop. Unfortunately, on removal he have found that the carbs (or maybe even the motor) is from a later model so we have had to order a different set of carb repair kits.

As the XS is a custom chop, this can be the challenge with ensuring you can order the correct parts for the bike, if the registration & the actual age of the engine differ. 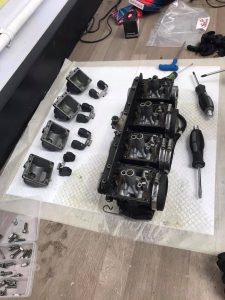 On Thursday we welcomed a 2012 Carbon Special Edition Triumph Speed Triple with 1700 miles on the clock. The Speed forms parts of a collection for our customer.

A short while ago our customer noticed a small amount of oil on the corner of the head gasket. Although the 2012 Speed Triple do have issues with head gaskets, as she is stationary & on her side stand most of the time; we believed at the time that perhaps the aluminium head had possibly crushed the head gasket over a period of time & subsequently caused it to weep. 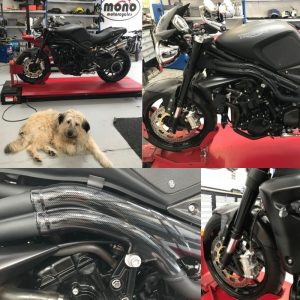 Upon investigation & once Daniel had fully stripped the Speed Triple & removed the head, the gasket, which is built in layers, seemed to be intact. We undertook some basic tests in the absence of laser sighted measuring tools, to assess if the aluminium head may have warped. Although our straight edge showed miniscule gaps between the straight edge & the head; we could not, without specialist tools, categorically draw this conclusion.

We did note however, that there seemed to be a considerable amount of gasket seal having been added to the head gasket, maybe an indicator of an underlying issue. Again, we cannot categorically agree that this is why it was used.

Therefore, having spoken with our customer & gained his authorisation to proceed with the rebuild; Daniel commenced the rebuilding of the engine. 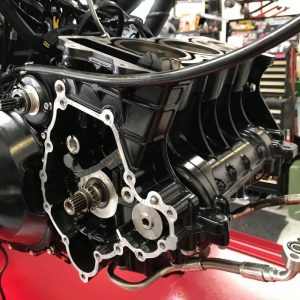 If you ever wonder why it cost’s so much to change a head gasket, here is the reason why! Daniel started stripping the Triumph Speed Triple at 10.00 & the head finally came out at 13.30. Once Daniel had assessed the head gasket & gained authorisation to rebuild, he commenced rebuilding the engine at 14.00 & finished for the day at 18.00 with still some finishing off to do on the Friday. 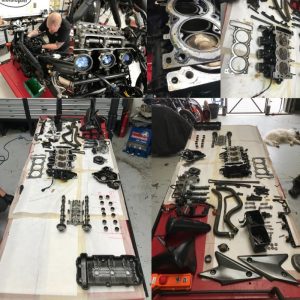 In this case, we were lucky that the head was managed to be freed sideways through the frame. On a lot of motorcycles, the only way to replace head gasket’s is to remove the engine & then strip it. Hence why it is so time consuming & an expensive process if a head gasket does fail.

We are so excited that our first Breakfast Club in over 18 months, is now only a matter of weeks away. We have a gloriously hand painted motorcycle which is being unveiled at the breakfast club, with an Armed forces theme. The bike has been developed to act as a fundraising tool for the Royal British Legion, whom we will be collecting for on the day. 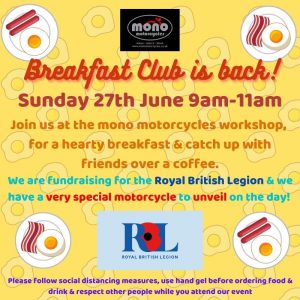 We are also celebrating the opening of DJK Motorcycles, one of our dear friends new Motorcycle Sales, Storage & Transport ventures which is opening only doors away from the mono motorcycles workshop.

So many exciting things happening here & after such a tough time for us all; it is fantastic that life & times seem to be now moving forward in a more positive way.