On Sunday 18th July 2021, we will finally be able to start our popular Breakfast Clubs again after our last one being in 2019!

Our first Breakfast Club of 2021 will also be a Charity Fundraiser for the Royal British Legion. Rob, our dear friend & supporter of mono motorcycles, has had his XJ9 transformed with a stunning painted tribute to the Armed Forces through time & on Sunday 18th July the full bike will be revealed at our Breakfast Club.

Rob & his partner Paula will be collecting donations on behalf of the Royal British Legion & as it is the RBL Centenary this year, it would be incredible if we could all make the donations as favourable as is possible.

Here is the story of the XJ9 in Rob’s own words & why the bike has such a deep meaning for him & his family.

“The Yamaha XJ9 & me began our Journey 7 years ago. Originally, I bought the bike to do it up with my son Dan, you know father & son time tinkering away in the garage. 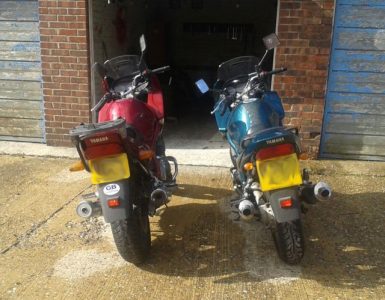 Well, life happened, work happened, tours of duty happened & family loss happened, this resulted in the bike remaining at the back of the garage half stripped down.

Fast forward to 2017 & things started to move. The bike frame came back from the paint shop where it then took pride of place in the living room on the coffee table, lovingly protected by the cushions from the sofa. 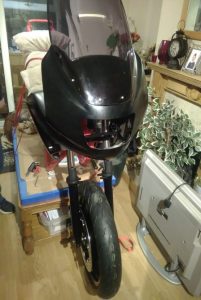 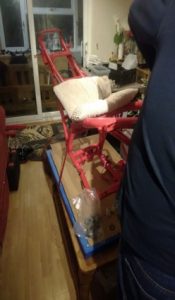 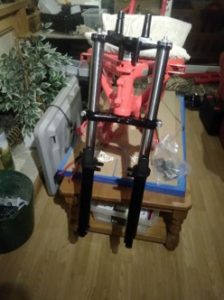 Various bits were cleaned in the dish washer with comments from the family of “you wouldn’t get away with it if mum was still alive.” The living room became our workshop with labelled boxes strewn all over the place & small oil patches dotted over the laminate flooring. 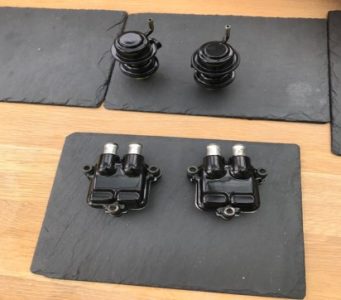 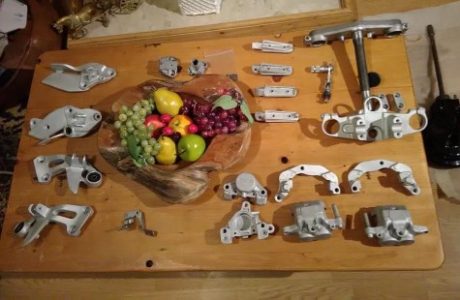 The XJ project gained momentum with the late Steve Goodyear of S.G. Motorsport coming on board & offering invaluable expertise & assistance. 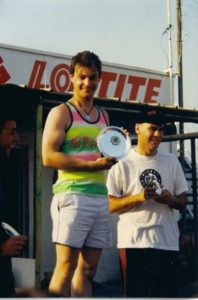 Soon my son & his wife decided that as the bike was now a rolling chassis it could be transferred back to the garage where my son Dan started the monumental task of putting the engine back into the bike.

More problems were to follow when after being powder coated the rear diff was seized – note to self, clean out the diff before refitting!

Enter mono motorcycles where Daniel became the knight in coveralls, who waved his magic spanner & sorted the first of many problems. The bike could still be in the garage if it wasn’t for the help & support of Daniel and Kate at mono motorcycles who in October 2020 then went on to sort the electrics & wiring, which were sending both my son & myself grey! 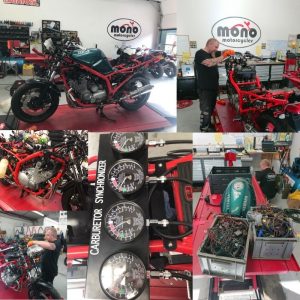 It was at the same time that after a few beers in the garden with my son & his wife we decided to make the bike more personal to us & our army careers.

Before I joined the army, I had previously helped my dad to rebuild a motorcycle which I had found in a skip. Whilst he was teaching me to ride (Dad as pillion) dad came off worse one day when I changed gear too fast, popped a wheelie & promptly dumped my dad on the road on his backside. Once he could sit down comfortably again, he forgave me & we had a good laugh about it.

I joined The Royal Corps of Transport in 1981 & for the best part of 24 years I served in numerous conflicts around the world.

The forces baton was then taken up by my son Daniel who has already served 12 years & is currently a Sergeant in The Royal Engineers.

Enter Jamie from J.A.A Custom Paint who we met to discuss our ideas armed with various images & requirements. Lots of “Hmmm that’s gonna cost” and “Have you thought about this?” After a couple of hours Jamie said to leave it with him and he would give it some thought. 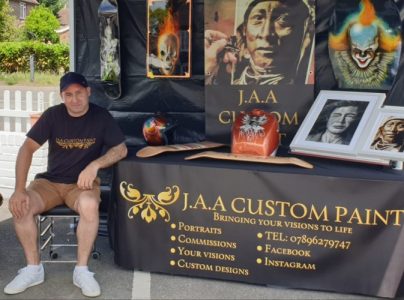 Jumping forward to March 2021 & we collected the various panels from Jamie & put them back where they started on the spare bed of course, newly painted and arranged like precious jewels. The result far exceeded our expectations Jamie is an absolute genius and true artist!

April 2021 & the project was complete & looking far better than we could have imagined. What started as an idea to spend quality father & son time has led to so many people investing time & energy in.

This custom restoration would not be what it is today without the invaluable help of my son Dan, his wife Shelby who chose the red colour. The late Steve Goodyear, mono motorcycles & Jamie from J.A.A. Custom Paint. I thank you all for all the effort and investment you have put into this creation.

Turning the motorcycle rebuild into something special to enable us to raise money for The Royal British Legion was a complete no brainer as it is a cause close to our family’s hearts with my Gran & Mum both being lifelong members.

What’s next? Well, the bike will now start its fund-raising journey. We hope to raise some money for the Royal British Legion by attending events Like the Breakfast Club at Mono Motorcycles & Custom bike shows & other fund-raising opportunities”