The Isle of Mann TT circuit is a magnet for international road racers & racing enthusiasts.

The Isle of Mann TT races, steeped in decades of history, draws out the fearless & sets them off at breakneck speeds through narrow country lanes & over mountains.

Hurtling through quaint villages with stone walls elbow distance from the riders as they roar past; these seemingly reckless dare devils use split second calculations to try & ensure they make it round another lap.

For the most part, the racers at the Isle of Mann TT are men & always have been.

But the Isle of Mann is not the only place you will find seasoned road racers ripping up the tarmac & it’s not only men you will find in those leathers either!

Throughout road racing history, more & more women have taken up the road racing mantle & have won race after race & stood on podiums alongside their male counterparts.

But it has not & is still not easy for these fearless women to gain the recognition they deserve. Securing sponsorship is difficult enough as a male racer, as a woman, it is almost impossible.

However difficult breaking into road racing is & the lack of acceptance as equals; women have continued to make history on the road racing tracks.

For our 2021 International Women’s Day we are celebrating women & their road racing journeys to glory.

Beryl’s passion for motorcycles & motorcycle racing was born when in 1959 she married Eddie Swain, a motorcycle repair shop owner. She became a prominent member of numerous motorcycle clubs, & opportunities arose for her to start racing. 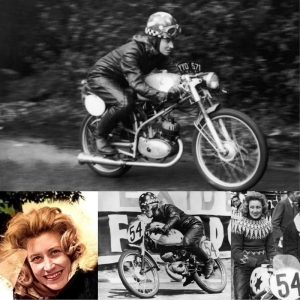 Her passion continued & it wasn’t long before she became a keen competitor in events at both Snetterton & Brands Hatch – eventually finding her ideal niche with the 50cc class, whilst also trying out 500cc bikes at Hackney Wick speedway. (1)

It was in 1962 that Beryl Swain would get the chance to make history – becoming the first solo female rider to compete in & complete the perilous Isle of Man Tourist Trophy course.

Swain rode on an Italian Itom 50cc racer, in the first year that the 50cc Ultra Lightweight class had been granted world championship status. Riding in a field of 25 other racers, she managed to negotiate the notorious mountain course, & after 37 miles of grit & determination she finished in 22nd place. 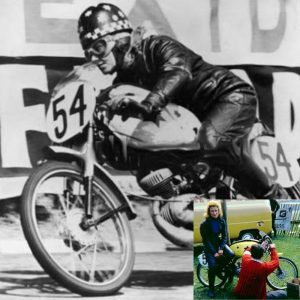 Sadly, Swain had her international road racing licence revoked by the FIM as they felt that it was not right for a woman to put herself in such danger & not a suitable sport for a woman. The FIM introduced a minimum weight limit to enter the competition, a limit that Swain simply couldn’t meet, putting a swift end to what should have been the start of an international career.  (1)

Despite campaigning & gaining some support in the industry, Swain’s licence was never reinstated & she hung up her leathers, never to race again.

Carolynn Sells made history at the 2009 Manx Grand Prix when she became the 1st woman to win a solo motorcycle race on the Isle of Man TT Mountain Course! Winning a Guinness World Record in the process!

The BBC spoke to Sells in 2009 & this is what she had to say about her Manx GP experience.

“I have always preferred the Manx Grand Prix over the TT.  My dad started racing here when I was 12 years old and since then I have come here almost every year.  The MGP has a real community feel about it and it’s not as hectic.  My heart lies at the Manx Grand Prix. (2)

“When I entered the MGP this year the aim for me was to win.  I didn’t realise that it was 20 years since the first woman competed until we were called up to the first press conference.  It is nice timing and makes the whole thing just that little bit more special.

“I would like to see more women at the Manx Grand Prix and the TT races.  The problem is women don’t get into the sport as early as men because it is not a usual pastime for a girl.  But we are seeing more and more women getting into the sport.” 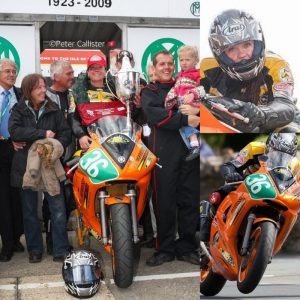 “I’ve always considered myself just me.  I am not doing this to prove a point; I do it because I love it.  Having said that I am proud to be doing it for the girls! (2) Carolynn Sells, 2009

Melissa, 28, has been racing for 13 years mainly on short circuits during the early part of her career, & latterly mostly on roads & in September 2019, she became the first female rider to win an Irish National road race at Killalane.

2019 proved to be Kennedy’s most successful year to date, something of a breakthrough year, with her victory at the East Coast Race Festival at Killalane being preceded by four rostrum finishes – second places at Skerries & Faugheen, & third positions at Armoy & Kells. (3) 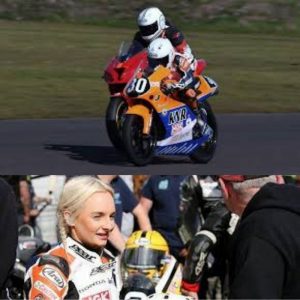 This series of results were enough to clinch runner-up spot in the Irish Moto3/125 Irish Championship & the Melissa also claimed a maiden international podium by taking third behind Michal Dokoupil & Christian Elkin at the Ulster Grand Prix in August (2019).

Melissa’s passion for motorcycling comes from her father; her inspiration, chief mechanic & her biggest fan.

“My dad always had a road bike & I thought that it was class, him putting on his leathers & going off on his bike. He bought me a motorbike for my 13th birthday & then I started to race, first on a 125cc Aprilia, then a 125cc Honda & now on a Moto3 Honda.”

“Some of the guys on the circuits don’t like being beaten by a girl, but I don’t encounter that sort of attitude at the road races. (3) 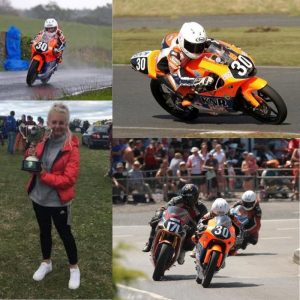 “It is definitely harder for a woman in this sport, particularly when it comes to things like getting sponsorship & recognition. But there is no reason why women can’t compete along with the men. (4)