“As some of you may be aware I have finally (after a false start) bought myself a Suzuki GSXR750 to use for track days. It’s a 2009 model which had previously been used as a track bike but had been stood for a couple of years.

After a bit of haggling I managed to get the bike for just over £3000. It’s got quite a few good bits, including Ohlins rear shock, full arrow exhaust, Ohlins internals in the front forks, HM Quickshifter, thumb brake, & a few other bits & bobs.

Once back at the workshop a few late nights were had tinkering & servicing the GSXR. I did add a few new bits. SES provided me with a new set of adjustable rear sets with fantastic service from word go. These particular rear sets you can buy each part on its own, ideal if you have an off.

The original Arrow exhaust silencer was a bit battered & is really a bit on the loud side for UK tracks, so I decided to contact MHP exhausts. MHP make a “clubman” 450mm end can to your spec. I dropped them an email with the exhaust I was running & a few days later a beautifully made end can arrived & fitted as a direct replacement for the Arrow can.

After a rather uncomfortable 30 degree night’s sleep in a lovely hotel, we were up at 6am to get to the track for 7am.

Unloading my bike into the pit area we were grateful that the weather was a little cooler & headed over to the cafe for breakfast & briefing at 8.30am

James Whitham presented the briefing, explaining that the training days were about improving your riding steadily throughout the day. Each of the instructors were or are current racers from the likes of the TT or BSB.

The groups were split into 3 & you were asked which group you wanted to be in. Advanced, intermediate or novice. All the groups were small with 12-15 riders in the advanced group & around 20 each in the lower groups.

I opted for the advanced group & Billy McConnell – Superstock Racer & Richard Cooper – BSB Racer – were our instructors for the day. 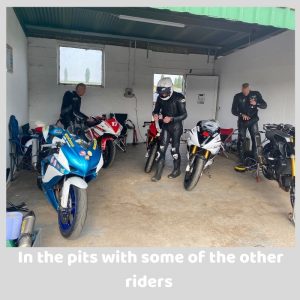 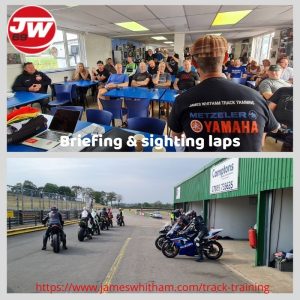 Simon, still carrying a hand injury after crashing his own Suzuki GSXR1000 at Donnington Park back at the beginning of the year, went out & did the sighting laps in the intermediate group on my bike but within a few laps came in saying his hand was too sore to continue.

Next up it was my turn. Exiting the pits for the first time on a bike I had not ridden before, telling myself to remember to change gear the right way as the Suzuki was set in race shift pattern (1up, 5 down) I steadily increased the pace.

After our sighting laps it was straight into a 20 min session. Although I thought my pace was OK, I struggled with a few of the lines & missed a gear going into the tight hairpin. 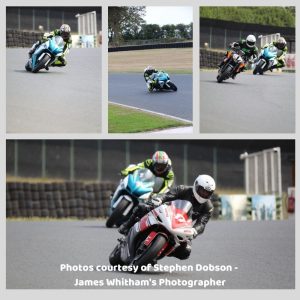 Richard Cooper must have been behind me as he came passed & tapped his tail to signal me to follow him, going slightly quicker but showing me the faster lines. After 20mins I was spent! As the session ended, I returned to the pits & walked up to the end garage for the debrief.

Both Richard Cooper & Billy McConnell explained to the group what they had observed & then went through a map of the circuit & explained what gear we needed to be in & where. It was some relief as it looked as though I had been doing that bit right!

Richard said that where a few of us were going wrong was we were not moving our bodies enough through the chicane & we needed use the strength in our legs to make our bikes turn Faster. This has an added benefit of not wearing yourself out as fast. He went on to say on the next brief they would go through some body positions on the bike.

40mins comes round very quickly but I was able to drink some water & fit the tyre warmers for 20 mins before the next session.

This time with no sighting laps I was on it from word go. With the tyre warmers I was able to push harder right from the start. Apart from changing down instead of up coming out of the bus stop chicane & nearly spitting myself off; my lap times seemed a bit quicker. The biggest thing I noticed when I came back in was that I was nowhere near as exhausted, having taken on board the instruction to use my body more to move the bike.

Next briefing was body position & braking. Billy McConnell demonstrated how he sets himself up on the long corner before he starts to brake. Almost sitting sideways using his leg to help take the force off his arms, helps to reduce fatigue.

Braking from high speed & putting 3 times your body weight through your arms uses a lot of energy, so using your legs & core can reduce fatigue massively.

I was surprised to hear Richard & Billy advise us not to use maximum pressure when braking from high speed, for example into a corner & advised us to get on the brakes slightly sooner with less pressure. This gives the bike a chance to settle before turning & creates a better line.

Next session out & going at a much quicker pace, I noticed the GSXR started to hold back & wouldn’t rev at about 10,000rpm (max revs 14000) I pulled into the pits & undid the filler cap. It was very pressurised! I replaced the cap & when I went back out, I thought that that might be the issue. However, after 3 laps the missing got worse & worried someone might run into the back of me, I reluctantly came in.

It was lunchtime so we had an hour to have a look. When riding the GSXR it felt like fuel starvation, so we lifted the fuel tank off for a look. We tipped the tank out & my suspicions were correct. Rusty fuel came out from the inside of the fuel tank.

When I bought the bike only a couple of weeks ago, it had a different fuel tank on it & some pretty battered body panels. Therefore, I found a second hand full body kit that had been painted including a matching tank.

Unbeknown to me the tank must have been off for a long while & without the tank being blocked, dust, rust & general crap had got in. Despite me having added a fuel stabiliser to the tank when I filled it, when we dropped the fuel pump out & removed the fuel pump strainer, it was clogged solid. A quick wash out with some brake cleaner & we were back in business. 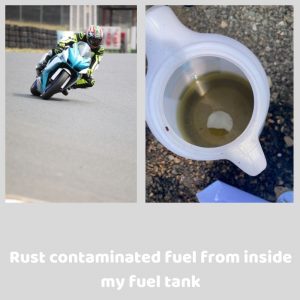 Heading back out the power was back, I put in some good laps, then after 3-4 miles the bike started missing again.

As I headed back to the pits, resigned to the fact that my track time was over;  I was still pleased with how the day had gone & was pleased that other than the sight misfire the bike had performed well.

The Dunlop SportSmart TT tyres had been faultless with outstanding grip & good feedback. The suspension must have been almost there as tyre wear was to a minimum, with no cold tear.

I got out of my leathers & wandered up to the first pit where James Whitham was to get a free cup of tea & guess who walked in? Only Scott Redding WSBK Racer! I congratulated him on his WSBK finish from the week before, had a quick chat about the BMW & then I sat trackside to watch the rest of the day & although I would have preferred to have been out on track, it really wasn’t a bad place to be. 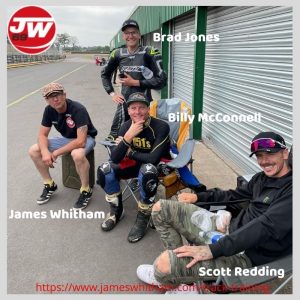 Despite my bike messing around, the entire day was an incredible experience with top rate instruction both verbal & physical & it made such a difference to be immersed into the training in real time, with expert & professional riders on tap.

Therefore, if you are thinking of doing your first track day or even if you are a seasoned pro, there is always something to learn. Forget about buying carbon bits to make your bike lighter, spend your money on some proper track training with James Whitham & his BSB & TT masterclass.” 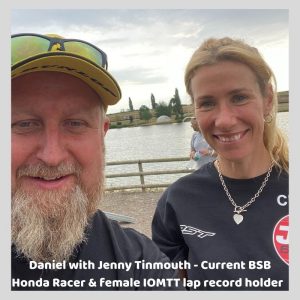 MHP Exhausts are an Ebay shop.

Paul approached James in 2012 with the idea for the track training days, following a bad experience on the first, in at the deep end, track day that he attended.

“As an enthusiastic biker, the idea of a bike track day really appealed to me. Unfortunately one of my first experiences was not a good one! I felt there was a gap in the market for a day that offered both time on the track and coaching from riders that are at the top of their game. That’s when I approached James with the concept of a low numbers, coached day.

James thought it was a great idea and the days quickly developed with our coaching team steadily growing to what we have today.

Our aim is to continue to provide low numbers, high quality, coached days where participants can learn better technique, in a fun and relatively safe environment, and at an affordable price.” Paul Drinkwater