“A month or so ago Gary mentioned he was off to the Malle Mile at Grimsthorpe Castle & said I should go & take our Honda electric c90.

However, we were due to be on holiday at the same time so the plan was I would shoot up for the day from our holiday in Kent. COVID put paid to our plans as we were meant to be sharing a house with 4 other families, so still in lockdown we cancelled & rebooked for later in the year.

Ok so holiday plans on hold, we went online & bought a weekend camping ticket. As we had decided to take the week off anyway, Katy’s Mum & Dad were coming to stay so Katy bought  another ticket for Pip (Katy’s Dad).

Van loaded, caravan cleaned & a full tank of diesel we headed off north towards Peterborough. Being a Friday it took a lot longer than anticipated, however not as long as Gary’s journey as he got most of the way up the A34 before he realised he had left his bike keys at home!

On arrival at Grimsthorpe Castle it was packed! 7 lanes of cars & vans as far as the eye could see & in 1 hour we had moved 100 metres! Thankfully the Malle Mile team could see the issue & walked along checking tickets & handing out the relevant wristbands.

By the time we had set up it was 9pm so after a cuppa we decided to wander down to the start line where there was a live band & vendors. What a fantastic layout, like a mini festival surrounded by some beautiful machines, music, awesome lighting, food & drink with everyone having a great time. 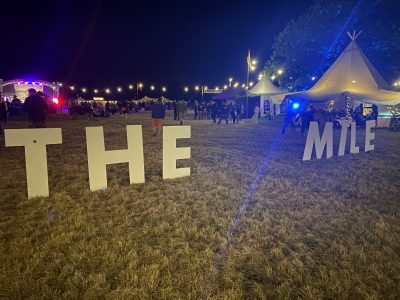 Next morning we awoke to the sound of bikes warming up & buzzing up & down the car park area.

I went down to sign on as I was meant to be riding in the midnight mile for electric bikes. Another queue! Took about an hour to get my number & pass to ride.

I had all day to hang about before the midnight mile so after riding about the site & watching some bikes out on track, it was very apparent that although an “inappropriate motorcycle race” 90% of bikes were old motocross machines, or at least running dirt bike tyres. I suddenly got the feeling I’d brought the wrong bike or at least I should have also bought an off road bike. 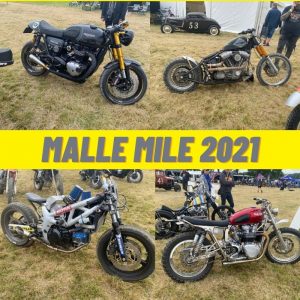 While looking at the displays I met up with Ollie who we installed a motogadget wiring system for his Triumph Bonneville T100 White Helmet’s tribute bike earlier this year.

It was fantastic to see the Triumph complete & being shown off in all her glory. It was while we were chatting that he let me know he’d been interviewed by The Bike Shed ‘Regular Rides’ feature & he even gave us a mention when describing the processes the Triumph had gone through. Thank You Ollie. 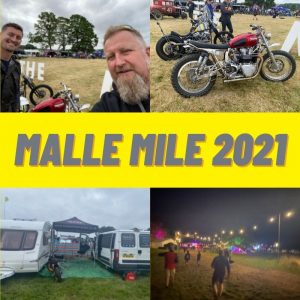 Back at our makeshift camp I thought I decided to try & remap the Cubs controller. I have heard figures of 50-60mph & a lot more acceleration with a few tweaks. Ok this would kill the battery in no time, but I would only be racing for a few minutes.

Try as I might I could not get the laptop to communicate with the controller. Arrrrgh! Frustrated I decided my best chance was to make sure the battery was fully charged for the race ahead.

Come 8pm that evening we decided to wander up to the front of the castle to see where the race was meant to be held. We spoke to a marshall & asked where the race was to be run. He informed us it was no longer on the drive but over at the hill climb, however it was now due to start at 10 pm.

With an hour to kill we decided to watch the drag racing. They had all sorts, from 1920 cars to modern race bikes. Fastest thing of the evening was an Electric road bike the Energica Eva, even beating a Ducati Pangale!

The evening was starting to draw in, so I went & got the eCub & buzzed about the venue trying to find where the midnight mile was going to be held. Finally, I found a guy riding a Super Soco electric scooter & he informed me they had changed the midnight mile to the off road hill climb and it was now at 10.30pm.

I made my way to the hill climb & a crowd started to gather as the track was lit up & the other riders gathered. The MC arrived with the video teams, fire breathers, fireworks & other pyrotechnics. It was time to race!

Going off in pairs I lined up alongside a home built bike running a 1500w drive motor & a stack of batteries all in a Matisse frame. Thinking I am in trouble here, I’ve even got road tyres & he’s on knobbly’s, I waited for the flag to drop. Go!

I made a dash for the first corner, all the motocross tricks I had learned as a kid came into play holding the Matisse special off through all the turns. Out of the final turn was a straight run to the flag up hill. 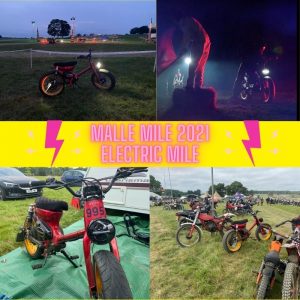 Unfortunately, the hill was hard going for the little eCub & the Matisse passed me with ease just before the line. We rode back around to the start line & lined up for another go. Boom! another shoot up the hill with lots of whooping & hooping from the crowd! Again I lost out across the line, but it was great fun with a fist pump from other rider as we came back down to line up again. 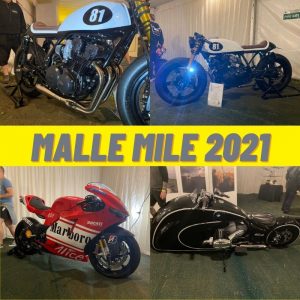 The whole weekend had a positive festival feel about it & everyone seemed to be having the very best time. Katy’s Dad enjoyed everything & would often find a perfect vantage point to be able to watch multiple races at one time. The incredible custom motorcycles on display were a testament to the innovations of the custom bike scene & having an opportunity to race the ‘mono elekTrik’ Honda eCub was fantastic fun, especially as it was up hill in the dark! 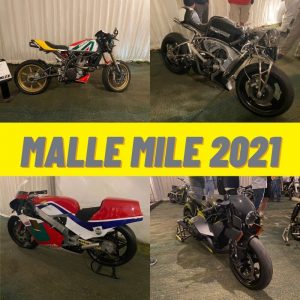