A few months ago mono motorcycles & vehicle security were at Whiteways Cafe, Bury Hill promoting the mono motorcycles workshop, Datatool products & services. As is often the case, we were asked about 6v to 12v conversions.

We were approached by a gentleman asking what we had to offer. We got chatting & he asked me if I was able to work on motorcycle electrics. Naturally I replied that yes this is something mono motorcycles specialise in, as it is a core part of our business. The gentleman went on to tell me he has a few motorcycles,  but that one was causing him a few issues. We arranged a convenient time to meet & armed with a multimeter I went to have a look.

The motorcycle in question was a Jawa 350 twin cylinder two stroke, (fitted with a side car outfit) I have bit of a soft spot for them as years ago a friend had one with knobbly tyres on & we used to ride it around our local wood. Too heavy &  low revving for any serious fun, but at the tender age of 14, anything with a motor was fair game.

The issue with the Jawa outfit was it would only travel about 4-5 miles before the lights became dim, the engine would start to backfire & it would roll to a grinding halt & the gentleman’s wife got to the point where she refused to push it home, again! Something had to be done!

It didn’t take long to find the issue. The previous owner had fitted a 12v battery & changed the bulbs. However, they had left the old 6v dynamo system in place. Holding the revs, the best we saw was 7.3v, never enough to charge a 12v battery!

Jumping straight onto the internet it didn’t take long to find a specialist on Jawa Motorcycles that did a 12v conversion in Czech Republic & for a mere 6526.92 Czech Koruna (£225 inc shipping). PayPal to the rescue & I measured up for a more suitable battery to fit in the original battery holder. Ten days later a box of bits arrives: new stator, electronic ignition, flywheel, regulator & a new coil, complete with the wiring harness. The conversion is made by a company called VAPE & looks very well made. Setting a day aside to complete the install, I headed over to my customers house to undertake the install.

My first challenge was to remove the original flywheel which is a dynamo bolted to the end of the crank. It weighed a fair amount, but once off the stator & new flywheel could be added.

The stator, pick up sensor & new flywheel went on fairly easily with a small bit of filing to the pin in the crankshaft as these Jawas do not have a woodruff key.

The next challenge was to tackle the wiring.

The next challenge was to tackle the wiring & replace the regulator with the new solid state type. The motorcycle had been re-wired at some point & was very poorly put back together. No fuses & wires twisted or choc-blocked together. There was nothing for it, it had to be sorted. Therefore, I had to strip back the wiring all the way to the headlight & switch gear. Removing the old regulator freed up loads of space & the little 12v scooter battery located nicely in the plastic box under the seat. I also added a fuse to protect the system & lighting circuit. With the coil connected up, I decided to wire a relay to turn the motorcycle off. Without the relay the motorcycle runs the risk of giving the owner a nasty shock when turning the ignition off or not turning off at all, as the key & barrel are both metal as the coil needs to short to ground to turn off.

The only real issue was the location of the ignition coil, although smaller than the standard twin coil set up, I had to weld a bracket to the frame to hang the coil from under the fuel tank. With the wiring tidied up, heat shrunk & the electrics checked, it was  almost time to kick it over. However,  before the first fire up, I put the HT lead to the top of the head & gave the bike a kick. Result! Huge blue spark, refitting the HT leads, two kicks & she burst into life.

Warming it up gently, & letting it idle we had a strong 13.9v rising to 14.2v when bringing the revs up with the lights on, which is perfect for a 12v charging system; not only delivering bright lights along with a bright ignition spark which helps with starting & performance. 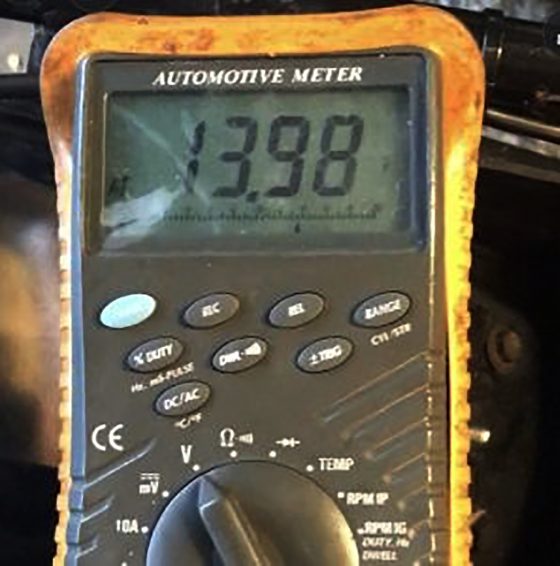 Warming it up gently, & letting it idle we had a strong 13.9v rising to 14.2v when bringing the revs up with the lights on, which is perfect for a 12v charging system; not only delivering bright lights along with a bright ignition spark which helps with starting & performance.

Overall the install was clean and tidy with good results. It took a bit longer than anticipated, but the motorcycle had almost a full rewire that increased the hours, but it means it will be far more reliable.

Best of all now the owners wife won’t have to push it home, mono motorcycles not only revives an old motorcycle, it saves a marriage too!

For more information about the services mono motorcycles & vehicle security can offer, please do contact Daniel Morris on 07899 654446 or through our contact page.