Motorcycle Halloween Horrors! What you don’t expect to find when repairing a motorcycle!

As Halloween approaches, we thought we would share a few of our motorcycling horror stories with you.

We recently welcomed a Ducati Monster 696 to the workshop. The Monster had been laid up for over four years. Before we could start the Ducati we had to make some considerable repairs.

When we removed the tank, it felt very light & sounded empty. (Ducati fuel tanks are plastic)

With the battery replaced, cambelts, oil/oil filter, plugs, etc replaced we added a fuel cleaner & some fresh fuel to the tank to turn the bike over.

Sadly, where the tank had been left empty, the residual ethanol had all but destroyed the fuel pump housing, badly corroding the connections & the fuel filter was black. 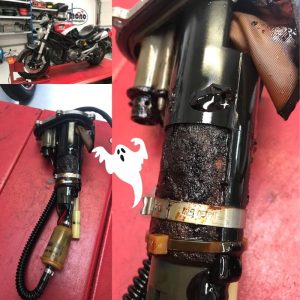 We usually steer away from second-hand pumps, but in this case the entire thing had to be replaced, not just the pump & to purchase from Ducati you are looking at in excess of £800! We have in this case managed to find a pre-loved one in Italy which appears intact & comes with a warranty.

This is one of those unforeseen elements which can appear when any motorcycle has been laid up for any period of time. When we speak to customers about their projects, we always advise them to have a contingency fund available just in case something unforeseen appears & costs begin to run away with them.

At the beginning of 2020 we welcomed our first wiring project of the year in the form of a Suzuki VX800 trike. The trike came to us as a non-runner with the conversion & electric’s having been modified elsewhere. The customer purchased the trike as a running bike.  However, upon receipt, the trike ran for a few moments, then cut out.

Daniel was tasked with getting the trike running & ensuring that the electrics were safe.

Upon investigation, the wiring was in need of some considerable attention! This included making certain areas safe, as there appeared to be some live feeds exposed against bare metal & were a potential fire hazard. 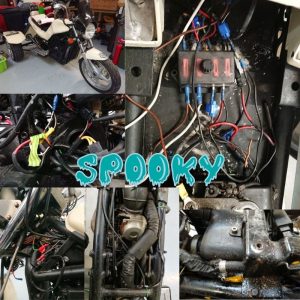 If the bike had managed to remain running, there is a good chance it may have burst into flames!

Daniel, using his many years of extensive wiring knowledge & using another wiring loom; managed to make the bike safe & convert the lights to UK standards.

The Thunderbird joined us for an overheating issue. The customer had advised that he wondered if the radiator might be leaking.

Upon inspection we not only found that the radiator was leaking & the header tank was empty; but the radiator had all but disintegrated!

We managed to source a new radiator & as can be seen in the photo, the old one had most definitely had its day! 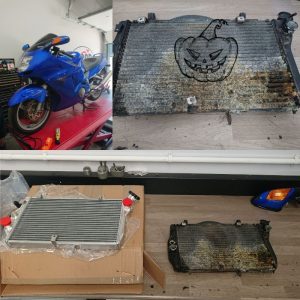 The Triumph was first brought to us in October 2018 & was not charging. The customer advised that a new reg/rec had recently been fitted but it hadn’t made any difference to the charging issues he was experiencing.

Daniel first tested the new regulator rectifier which was not charging @ 12.4V.

He then checked the stator output: AC voltages at 3000rpm = Pin 1 30Va/c, Pin 2 30V a/c, Pin 3 20V a/c & he concluded that there was bad wiring in stator Pin 3. He also found that the regulator rectifier had 2 power & 2 earths going into thin wires (2 into 1) causing high resistance. The wires were cut & replacement plug fitted & connected back into the correct plug-in wiring loom.

Daniel then fitted a new patten stator, which we attempted to advise we could not guarantee would be robust enough for the Triumph (supplied by the customer)

As we removed the old stator, we found coils burnt upon removal.

In January 2019, the Triumph was brought back to us as it was not charging again. The Triumph had only been ridden for 650 miles & upon investigation the stator was found to be burnt out again.

It was noted at the time of finding the stator was burnt out again, that the pattern of the burn matched the pattern from the stator from October 2018. This led us to undertake some research on the motorcycle in question.

We discovered that the Triumph Street Triple range 2005-2009 were on an original recall due to a faulty regulator/rectifier. The reg/rec was overheating in its original position & under the recall a new one was fitted in a different location.

As mentioned before, we had been advised by the customer in October 2018 that he had replaced the regulator/rectifier with a non-genuine Triumph part as he felt that this was to blame for the charging issue.

Despite us having to advise again that using a non-genuine part may not be robust enough for the Triumph, the customer asked us to arrange to return the burnt patten stator to the supplier & ask for another under warranty.

Having re-fitted another patten stator under warranty, the Triumph was charging at 13.1v at idle & 14.2 at 2000rpm.

Having seen that in some cases patten parts are not robust enough for certain jobs, we now do not fit patten stators as a matter of principal, as we have seen too many fail over the past few years. Although initially financially easier on the pocket, it becomes a false economy if they continually fail. 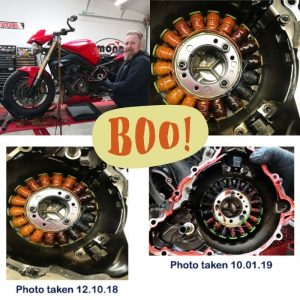 A few years ago we welcomed a Yamaha R6 to the workshop, which the customer advised had not run for 5 months.

We were tasked with servicing the bike, getting it running & if need be, to strip, clean & rebuild the carbs.

With the battery having been already disconnected prior to arrival, it was found to be in a state of ‘deep discharge’ so we put it on charge. We then set about draining the fuel tank as the fuel had gone off. Upon investigation we found that the fuel filter was blocked & a new fuel filter was placed on order.

Daniel then drained the float bowls & the R6 was then connected to the remote tank to assess running. The plugs were cleaned & the R6 was checked for a spark. The engine struggled to start having been run from a remote tank.

We then had to make the decision to remove the carbs. While the carbs were removed, a compression test was carried out & it was found to be 150/145/155/140psi all within tolerance.

Once we had stripped the carbs all of the jets were found to be bright green with dirt & corrosion. We had never seen such oxidisation on carburettor innards before, especially on a bike which had apparently only been sat for 5 months!

The carbs were then ultrasonically cleaned several times to remove the excess corrosion, all the jets were blown out & then the entire carb bodies were rebuilt. Despite the poor state of the carbs when we discovered them, once they had been checked & balanced, the bike ran quite well. 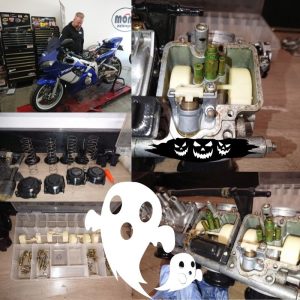 In 2019 we welcomed a Ducati 848 to the mono motorcycles workshop. The 848 was booked in with us as the owner noted that the bike was overheating & would cut out regularly.

When the customer arrived at the workshop from his home in Gosport, the fan had been on since he left home & the temperature was in excess of 108°C!

Once the 848 had cooled down & was up on the ramp Daniel first noted with a simple finger plunge that the radiator was bone dry. As Daniel took the side fairing off, a visual indicator of where all the water had gone was evident.

The oil glass was full of a milky substance & once Daniel removed the oil cap, his theory was realised, as there was congealed creamy white inside the cap. This means that the water appears to have mixed with the oil & is inside engine.

Once the oil was drained, this was further proven when the oil was a similar colour to chocolate milk.

Upon further investigation, Daniel found that the original mechanical seal from the water pump was found to have sheared in half, which is what would have allowed the water & oil to mix.

Once the parts had arrived from Ducati & had been replaced in the bike, we began the process of undertaking a series of engine flushes to remove as much of the emulsified oil from the engine as is possible. 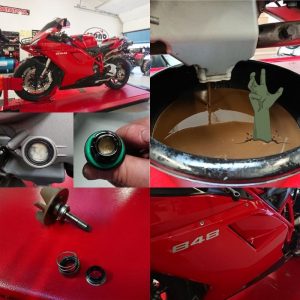 These stories show just how much of a financial & emotional investment owning a motorcycle can be & that you never know if something will go wrong. Regular maintenance, keeping up with servicing, regular chain, tyre, battery & fluid checks all can help, but if something big decides to break, an unforeseen bill can be difficult to swallow.