We have been very lucky over the past few weeks to have been working on a glorious piece of engineering, the Pendine Sands Yamaha R1 Land Speed Record Motorcycle.

Paul Milbourn of Paul Milbourn Customs, has been customising motorcycles for many years & his most recent creation, the titanium Moto Guzzi featured in numerous publications, was showcased at many custom bike shows including the Bike Shed, London, won multiple awards & stopped people in their tracks when they saw it. 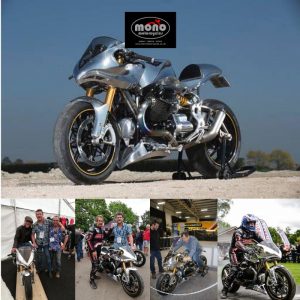 Paul Milbourn of Paul Milbourn Customs, has been customising motorcycles for many years & his most recent creation, the titanium Moto Guzzi featured in numerous publications, was showcased at many custom bike shows including the Bike Shed, London, won multiple awards & stopped people in their tracks when they saw it.

Paul’s latest challenge has seen him yet again think far outside the box. Sponsored by Devitt Insurance, Paul has set about using his Yamaha R1 road motorcycle for the project & knew there was only one man to undertake the wiring; Daniel Morris of mono motorcycles.

Here is what Daniel Morris has to say about the motorcycle wiring processes he has undertaken for the Pendine Sands Yamaha R.

“I was very excited about working with a Paul, as I have seen his work previously with the Titanium Moto Guzzi & fell in love with it.

The base of the Pendine Sands motorcycle is a 2002 fuel injected Yamaha R1 in a stretched Titanium frame with carbon wheels & alloy body.

Paul’s vision is to use less power than some of his rivals & rely on lightweight & aero dynamics to get him to the magic 200mph ON SAND!

The wiring loom needed to be the bare minimum to run, so my first job was to draw a wiring diagram. 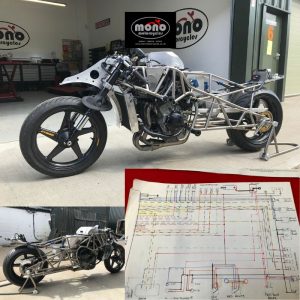 The wiring loom needed to be the bare minimum to run, so my first job was to draw a wiring diagram.

Looking at the factory diagram I could work out what sensors I needed to run the motor. Cam, crank, coolant, ambient pressure, vehicle speed, air intake & throttle position sensors all needed to remain. We then needed power to the coils, injectors, fan etc. This would then run down the left hand side of the bike. There is also a power, earth, 12v Switching & a speed sensor that needed to run to the Koso dash.

Once the wiring loom was drawn up, I could start on the wiring.

Day 1. We started by stripping down the old wiring loom. As well as the challenge of removing the lighting circuits, charging system & fuse box; we also needed to move the ECU from it’s original position on the road going R1 from just under the seat, to the rear of the very stretched frame!

With most wiring looms we build we normally remove a massive about of wire. Not with this one! We added around 60 metres of wire due the stretched frame & the ECU being at the rear. The ECU has 38 wires going to it, each wire had to be cut, extended, soldered & heat shrunk. A considerably time consuming task! 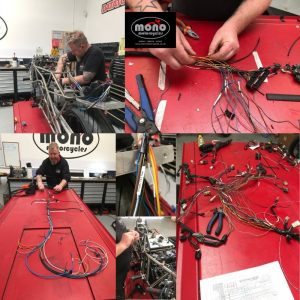 With most wiring looms we build we normally remove a massive about of wire. Not with this one! We added around 60 metres of wire due the stretched frame & the ECU being at the rear.

We ran the starter control wires into the wiring loom, marked them up & left them loose at the back for hook up later. Paul also wanted a battery volt meter added as the Pendine Sands Yamaha R1 would no longer run a charging circuit to keep weight to a minimum. As the Pendine Sands Yamaha R1 will only be run for around 10 minutes at a time, Paul will have a spare lithium ion battery on standby.

Once we had worked out where each one of the wires would lie on the frame, it was loosely taped together & moved onto the bench.

Making some tape marks at the points of each spur off to the engines sensors, the wiring loom could then be heat shrunk & braided to protect it from rubbing on the frame.

With the injection & coil wiring on the left hand side of the Pendine Sands Yamaha R1 done, the next day we turned to the power feeds & earths.

Day 2. Being a titanium chassis, the conductivity isn’t great on the Pendine Sands Yamaha R1. Therefore,  we made a good earth point at the rear of the engine block, both the left & right wiring loom will earth at this point keeping the wires to the battery minimal. Every component needs an earth to work, so these were added as we went along.

The power lead from the battery comes up to the starter solenoid mounted in front of the battery case. There is also a take off with the main fuse which is tucked down next to the battery inside the box. This supplies the ignition circuit. Therefore, the feed wire was extended up to the rear of the Pendine Sands Yamaha R1 to the relay locations. 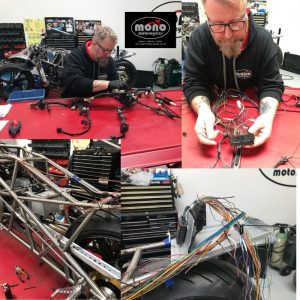 The ECU has 38 wires going to it, each wire had to be cut, extended, soldered & heat shrunk.

Day 3. The start of day three & our intentions turned to the right hand side of the Pendine Sands Yamaha R1.

On the right hand side we ran the switch gear for ignition, start, fan & nitrous oxide. Knowing the Pendine Sands Yamaha R1 will be being taken apart once she had left the mono motorcycles workshop, this could not be hard wired.

Using a couple of the old waterproof plugs from the original Yamaha R1 wiring loom, these were added & neatly tucked up under the airbox once refitted. Also, on the right hand side we ran the power & earth wires to the nitrous valves. These again have had quick release waterproof connectors for ease of repair. Next up was the fuel pump power & earth wires finally the main 12v power & chassis earth running to the rear of the bike.

Day 4. Day four started with connecting up the relays & tidying up the wiring loom. This bit is always the most difficult to make look tidy. My first attempt I junked after an hour as I wasn’t happy with how it looked so I started again. I needed a place for the earths to join at the rear so the mounting bolt for the tail was used as it made for a tidy install.

The first relay to connect was the ignition. Paul had given me a relay with a fuse in the top which came with the nitrous kit. This was ideal as an ignition relay as if there was a short anywhere this would blow & it’s not too difficult to get to. The next relay was for the fuel pump, then the fan relay & lastly the nitrous valves. The fan has been wired to the ECU with a manual override should it be required. Fans are only effective at low speeds (below 25-30mph) however one imagines that the Pendine Sands Yamaha R1 will get quite warm after a fast run.

Paul had provided us with a KOSO speedo instead of the Yamaha R1 dash which he had been told was a straight swap. Sadly, when I went to plug it in, it didn’t fit.

With time ticking on I decided to call it a day but took the power commander home to extend the wiring while Katy watched Masterchef. 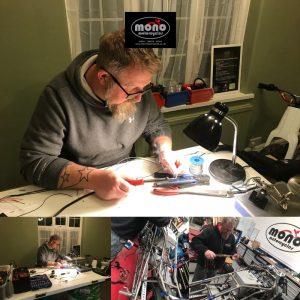 With time ticking on I decided to call it a day but took the power commander home to extend the wiring while Katy watched Masterchef.

Day 5. Next day with the power commander loom completed, I had to rewire the KOSO dash. This needed a signal wire from one of the coils & a separate coolant temperature sensor. The wire ran to its new location. Paul will need to add it into the cooling system somewhere, but for now I could start it up & check the temperature with my digital tester.

Next, we needed to pull the flywheel off, remove the stator & refit the flywheel bolt & case. We then had to add oil water & fuel to the engine before attempting to start the Pendine Sands Yamaha R1.

Before starting the Pendine Sands Yamaha R1, we checked the relays worked. Thankfully they were all good. We cranked the bike & within a few turns it fired into life. We gently warmed the bike up for a few minutes before shutting the engine down for a bolt check.  We then set about re-fitting the power commander wiring & refitted the airbox correctly. 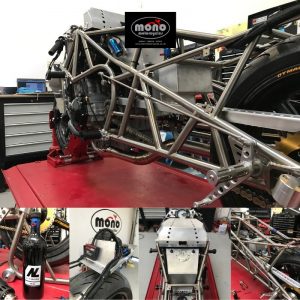 Before starting the Pendine Sands Yamaha R1, we checked the relays worked.

Once we had completed another run up & checked the Pendine Sands Yamaha R1 was running well; it was ready for Paul to finish off a few bits before it heads over to CMW in Chichester for a rolling road tune & top speed run.

In total, we spent around 35hrs in total wiring Pauls Pendine Sands Yamaha R1 & we wish him all best in his quest for the magic number”

Here is what Paul Milbourn of Paul Milbourn Customs had to say about the development of the Pendine Sands Yamaha R1 & the engineering decisions he has taken to realise the nitrous machine.

“Like all modern sports bikes the Yamaha R1 has a fantastic motor. I am a huge fan of the Yamaha R1 & my initial thoughts were that as I had my own road bike, my Yamaha R1, what better motorcycle to use as the base for the Pendine bike”

“My theory is that power is not the biggest hurdle at Pendine Sands & with this in mind, I plan to only use nitrous gas in 5th & 6th gear. Every motorcycle has an aerodynamic footprint & because at Pendine Sands there is no grip; my back wheel would just spin. Therefore, the plan is to drop the weight off the bike & get my arrow right with me sitting over the back wheel”

“The chassis has a 5-inch stretch at the back & a 1-inch at the front, with a 36 degree rake. The rake should slow the steering down & the extra length should make it more stable on the sand. I will also be able to lay over the bike to make it lower to give me better aerodynamics. However, if the bike is too long, then it will track in the ruts left by other bikes” 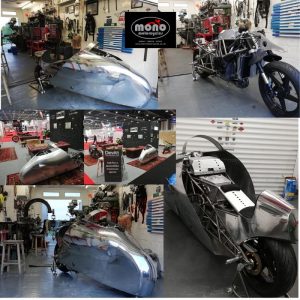