What can happen if you incorrectly fill your motorcycle with diesel?

We recently wrote about the effects the introduction of E10 can have on older motorcycles.

However, we have also come across two cases in the past week whereby customers have accidentally filled their motorcycles with diesel, instead of petrol.

Although this may have some people scoffing, we think there is a genuine reason why this may have happened & we don’t think this will be the last time we see this. According to the AA (Automobile Association) an average 79 people per day mis-fuel their vehicles due to a variety of different reasons.

Therefore, what is going on & how have these two people incorrectly fuelled their motorcycles?

With the introduction of E10 at the forecourts, a lot of companies have had to remove at least one other version of a fuel to make way for the E10 pump.

Having spent some time looking at the layouts of petrol forecourts, it’s a wonder incorrect fueling is not a more common occurrence.

Let’s take the example of the Shell forecourt & where FuelSave is indicated as an unleaded & diesel version. The FuelSave text being picked out in green for each option, could be one reason why the incorrect fuel has been delivered, as green is traditionally a indicator of unleaded fuel. If, for example you are tired, in a hurry or perhaps expecting the nozzle to be in the same place as always (but E10 has moved it); the green lettering could be a distraction to actually delivering the correct fuel. 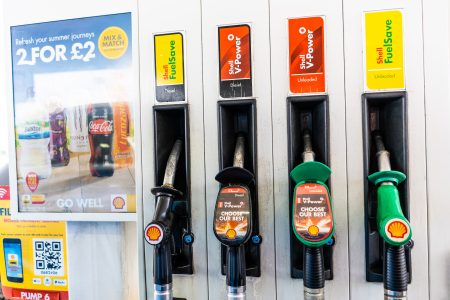 Our customers who have recently added diesel to their tanks rather than petrol, both said they would normally use Super Unleaded or V-Power unleaded. If the forecourt has removed the Super Unleaded & or V-Power unleaded & replaced it with E10; perhaps the customer has subconsciously clocked the E10 as not appropriate & then made an incorrect choice based on the presentation of the other options.

However, despite the reasons behind mis-fuelling, the question is what to do if you do add incorrect fuel to your motorcycle?

First. If you are aware that you have mis-fuelled, do not start your motorcycle or even turn the ignition on, as this will prime the fuel pump. Push the bike to one side & either call your recovery service or call a specialist fuel draining service to ensure the diesel is safely drained.

However, if you do happen to ride with the diesel in your tank, you will find that it will most likely backfire & stop pretty soon afterwards. This is when it can get a little expensive. Here are our two case studies from the mono motorcycles workshop.

We have recently fitted a new second life engine to the KTM & had just completed a running in oil service (Saturday). The customer said the engine had never felt so good & off he went.

On the Monday our customer called us & advised that while he was out riding on the Sunday, the bike had cut out & he had to be recovered.

Having just worked on the KTM extensively, we agreed to attend at the customers home to see if there were any fault codes present or anything glaringly obvious that might have caused the cut out.

While Daniel attended at the customers home, the customer relayed the scenario which led to the cut out. He had gone to the garage to fill his KTM as the tank was nearly empty & about 100 yards down the road, the bike had cut out & refused to start.

With the KTM back at the workshop & with no fault codes evident on the TEXA read out; Daniel decided to open the fuel tank. He didn’t really need to test the fuel as the smell was distinctly that of diesel.

If you know the difference between petrol & diesel, you will know that petrol with evaporate quickly due to the ethanol content & diesel has a natural oily viscosity to it & it will evaporate much slower. Furthermore, in their pure forms, petrol & diesel have very distinct different smells.

In the case of diesel having been run through a petrol engine, the plugs foul up & the backfire experienced by riders who do this, is due to the plugs being soaked in diesel & the diesel igniting as the plugs clear.

Therefore, in the case of the KTM we drained the tank entirely, replaced the plugs, flushed the system through with a fuel cleaner & added V-Power Super Unleaded to the tank. With the battery charged & the bike started, smoke poured from everywhere & it let out an almighty backfire, as the residual diesel burnt off.

The KTM is now running perfectly. 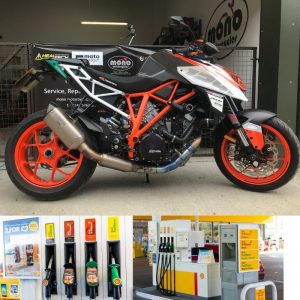 Having worked on the XVS carbs quite extensively earlier in 2021 (alongside many other tasks) Daniel knows his way around this bike very well.

We had the XVS booked in to clean & strip the carbs again, after the customer had run out of fuel & he felt that some debris had been dragged through the jets, blocking one of them.

However, as he was riding the XVS to our workshop, it cut out & would not start.

With the XVS having been recovered to the workshop, Daniel set to work.

First, he re-charged the battery as it seemed to be completely flat. He then stripped & cleaned the carbs, finding that the slow running jet was blocked. Having unblocked the jet & refitted the carbs, he noted a small amount of fuel had dripped onto the floor.

When the fuel was cleaned up, there was an oily residue left in it’s place. Thinking lightening can never strike in the same place twice, Daniel drained some of the fuel from the tank & left it in the sun. Over a period of a couple of hours the fuel evaporated, but only very very slowly.

Under further investigation, it was found that a proportion of the fuel was diesel. When the plugs were checked they had fouled up due to diesel contamination.

Therefore, we undertook a similar process as to the KTM. The plugs were replaced & the tank drained. With a fuel cleaner run through the system & some fresh Super Unleaded in the remote tank & the re-charged battery fitted; Daniel spun over the XVS, it spluttered into life & backfired immediately as the diesel ignited.

Once we had repaired the XVS we called the customer to explain our findings. It was at this point that the customer advised he had put fuel in about a week before, only about £6.00 worth just to top the tank up & about 6 miles down the road, the XVS had begun to backfire. With this knowledge in hand after the process we had just gone through, it was evident that in this case there was clearly enough petrol left in the tank to allow the XVS to run, albeit very badly & ultimately cut out. 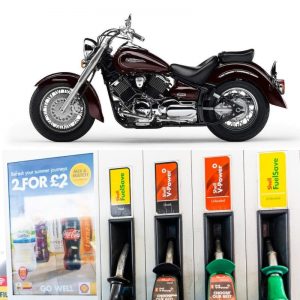 Therefore, if you are heading to the forecourts this weekend, be mindful of your choices, check your supplier has not moved the pumps around to accommodate E10 & above all, if you do happen to mis-fuel, make sure you do not start or ride your motorcycle & get recovered as soon as you possibly can.