A very Italian theme to this week’s mono motorcycles blog, as we find ourselves with four Ducati’s residing with us this week.

On Tuesday Daniel (after ordering parts Monday) began work on the Yamaha trike & it’s long list of bits which included: replacing the CV boot, wiring up the tow bar & the hazard lights, replacing one of the indicators & balancing the carbs.

Daniel decided to start with the rear & have found that the entire rear hub needs replacing which includes the CV boot, rear wheel bearing, hand brake shoes, hand brake shoe fitting kit & also modifying the back plate as it was bent, meaning the shoes were not seated correctly & potentially dangerous. 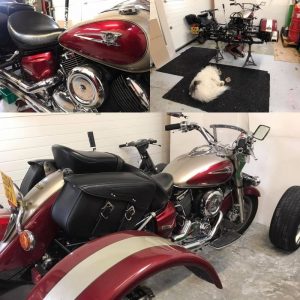 On Wednesday morning Daniel moved back to the Yamaha R1 & begun to teach Nathan how to fit a new clutch. The Master & the Apprentice working together, learning together. 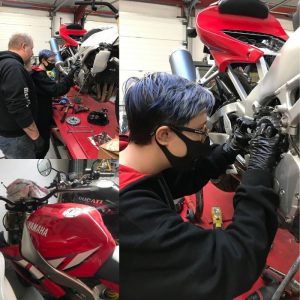 The first Ducati Multistrada 1200 we had been working on, was found to have a faulty water pump.

The clip having been missed from behind the water pump in a previous fitting, had pushed it outwards into the casing, caused the pressure valve to fail & water & oil mix together. We are awaiting parts to rectify this. 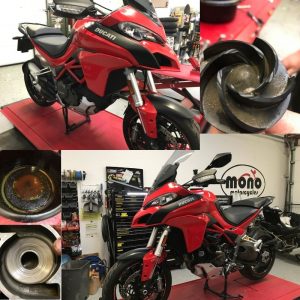 The second Ducati Multistrada 1260S joined us for annual servicing. 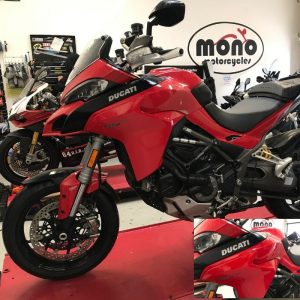 The stunning Ducati Panigale 1199 joined us with an intermittent performance fault, caused by an electrical fault. Daniel diagnosed a fault with the horizontal map sensor & the replacement should arrive Friday.

The Ducati Monster 900 we have been re-commissioning as it has been out of use for five years, continues to have issues with carburation, charging & misfiring. Daniel has spent extensive hours rectifying an ever growing list of faults, which may have been partly contributed to by the oil & fuel having been drain prior to the bike being dry stored.

Daniel spent Thursday at the workshop by himself, as Nathan doesn’t work Thursday’s & Katy was working off site. He therefore continued working on the Yamaha Trike with Sprocket in assistance.

Daniel continued to work on the Yamaha Trike on Friday morning.

Despite the rear hub having been found to have seized & all the parts having to be replaced & elements being fixed as they were dangerous; Daniel has also found that the wiring was mostly held together with choc blocks & in some cases, not even connected to anything. 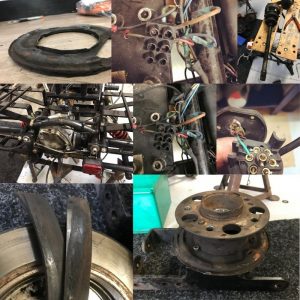 Despite us having originally booked the Trike in for two days & having a list of tasks to complete, the additional issues we have discovered has meant time has overrun. Our customer having been kept abreast of the situation throughout, has been very patient in the face of unforeseen additional issues with the Trike. Having only recently purchased the Trike, our customer could not have been aware of the issues we have subsequently found.

These are the reasons work can overrun, take more time & in some cases when we are bound by parts delays, back orders or in some cases, parts simply not being available anymore. Such is the nature of our business, sometimes things are not as straight forward as anyone could envisage.

Daniel has bought his son Nathan his very own tool cab, loaded with his own tools. Nathan has already sorted the cab, has plenty of stickers to make it his own & is already putting his first tool kit to good use with taking the Royal Enfield apart ready for Daniel to fit a Power Commander. 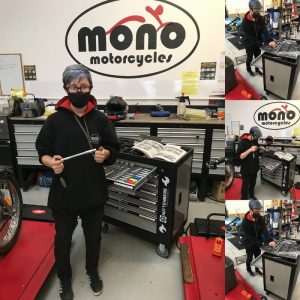 Our first raffle prizes are 3 x £25.00 mono motorcycles Gift Vouchers (1 voucher for each prize. Vouchers can only be redeemed against labour costs)

Raffle tickets are £1.00 each & can be paid for over the telephone, by bank transfer or in person at the mono motorcycles workshop. 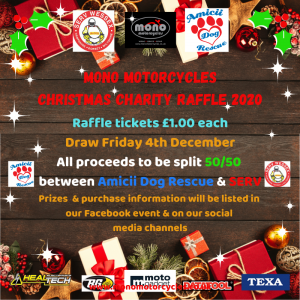