It’s been a week of triumphs (as in successes) & questions here at the mono motorcycles workshop this week. 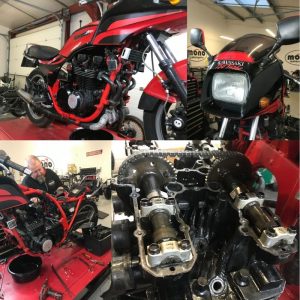 Then what happens?? There’s no base gasket in the parts supplied. Having contacted our customer he was as dismayed as us, but ever the optimist off he went & contacted his supplier. No joy & it looked like we would have to wait for one to come from Japan.

However, not to be deterred, our customer reached out to members of the GPZ750 community & low & behold someone had one! Result!

In the meantime, our customer took the head away as he wanted to spruce it up a little. The result is fantastic & really adds a unique quality to the GPZ. 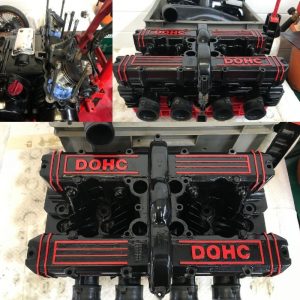 Now we have to fit the base gasket & bring the GPZ back together, which Daniel hopes to do over this coming weekend.

The Harley joined us for an MOT to be arranged, new tyres, replacement indicator & replacement choke cable. 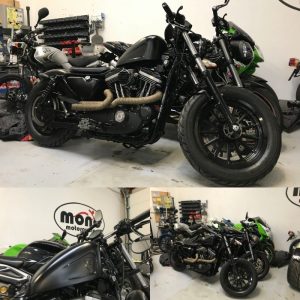 Having received the reg/rec (3.5 weeks waiting) last week & fitted this , we were still waiting on a new stator.

The VN1500 is just one example whereby a series of smaller faults, can build up to a bigger issue. In this case, the VN1500 has never run correctly since her owner has had her (about 18 months) Knowing that another establishment had worked on her Daniel removed the fuel pump from the tank last week & found that it was missing a hose. The hose clips were all in the wrong places causing pinching & that the ‘teabag’ style filter was missing. This again would have added to the issues with what on road test felt like fuel starvation. 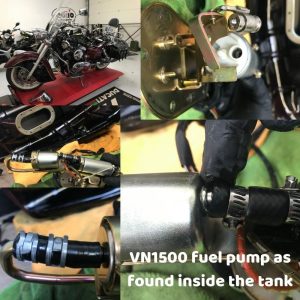 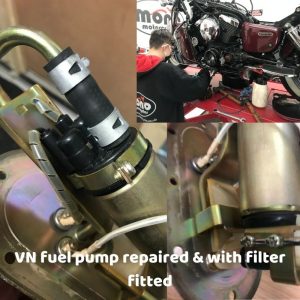 Daniel having sourced another fuel pump has managed to build one good one out of the two & the rebuild to be able to retest continues.

Our workshop has been dominated by a glorious American Custom Yamaha Royal Starr 1300 Trike this week. The Royal Star joined us for carb check/clean?/balance, valve clearance checks, servicing & numerous additional tasks to check all was in order.

When the trike arrived, it sounded like it was only running on 3 cylinders. Once the valve clearances were checked, we advised our customer that 14 out of 16 of them were considerably out of spec. As the trike has no milometer, we are uncertain how many miles the trike has done, but based on these findings alone, we would surmise that it had covered some considerable ground. 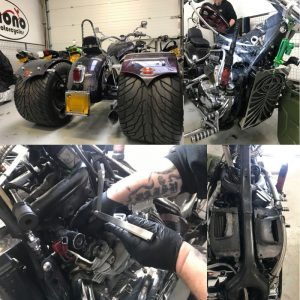 Having advised our customer of our findings & the estimated time/costs of continuing with replacing all of the shims; we did at this point ask if our customer had considered fitting the new engine he had at home. At this point we were instructed to proceed with the shim replacements.

When Daniel reviewed the plugs, he found they were all in the wrong heat range for the trike & two were Iridium & two standard. If the incorrect heat range plugs are fitted, an engine will run too hot & if they must all be the same make & type to avoid inconsistencies.

Daniel then removed & cleaned carbs, finding a sandy type residue in the carb bowls & all the jets were blocked. Therefore, all the jets & carbs were cleaned & the carbs refitted.

With the trike coming back together & having spent the better part of two days taking the trike apart, replacing 14 out of 16 shims, replacing all of the plugs as they were all in the wrong heat range, cleaning the carbs & jets & balancing the carbs; at the last hurdle the trike sounded like it was still only running on 3 cylinders.

It was then that it was noted that oil was blowing back through cylinder 2! Fearing the worst, Daniel decided to drop the oil (we were changing it anyway) & found a full 8 litres of oil in the bike. It should only hold 3.5 litres. (the trike has no sight glass, so there is literally no way of knowing how much oil is in there). This coupled with the plugs being in the wrong heat range & 14 out of 16 valve clearances being off, could have caused any number of things to happen, including the possibility of an oil ring having been damaged. (Sometimes we find a selection of faults throughout a bike & these can all add up to cause long term damage)

Despite all of the evidence we have gathered, recorded & reported & having not built the trike ourselves or worked on it before; without taking the engine apart, we are unable to fully ascertain why the trike is behaving in this way. 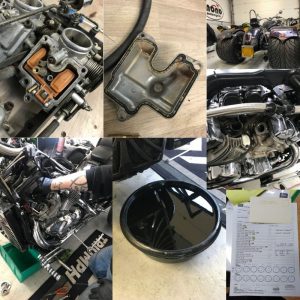 Having advised our customer of our findings, he initially asked us to put the trike back together & he would take her away for a rethink. Having spoken with him again today (Friday 5th Feb, 2021) he is now considering swapping over to the new engine he has at home.

We have recently written a blog about the wiring on our two recent Yamaha XS650 wiring projects. Once the Flat Tracker was completely wired up & ready to be kick started; it was found that there was no output from the stator. This was brand new, as are all of the components on the bike. 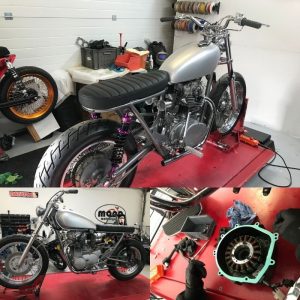 Having spoken with our customer & him contacting the manufacturer; we were able to test the stator to see how many ohms it was producing. In a nutshell, it wasn’t!

Therefore, our customer removed another stator (same model) from one of his other motorcycles & we fitted that. It was a ‘Ta Dah!’ moment as everything worked & the bike fired up & was charging!