We have been very lucky to have worked on some stunning custom motorcycles over the past couple of years. With this in mind, we have decided to run a series of blogs showcasing some of the incredible motorcycles we have had the privilege to work on.

For the most part, Daniel is involved in the Custom Wiring of the many Café Racers & Custom Motorcycles we welcome through our doors. However, there are times when Daniel is involved right from the start of a project & has much more of an involvement.

We first met Olly in early 2020 when he approached us to assist with his custom project. He had the entire Honda CB750 & was seeking assistance with the fabrication & adapting the frame. He was also very keen to have a motogadget system installed, to not only future proof the Honda, but aid with the minimalistic style he was aiming for.

Olly, having already planned ahead, knew that the majority of the work would take place over the winter, with the Honda being entirely stripped, the frame being modified & painted, the Honda rebuilt & then the motogadget system integrated at the end of the process.

We discussed Olly’s needs & came up with a solution for the frame.  The plan was to  fabricate a bespoke battery box to aid the minimalistic appearance of the finished Café Racer.

We spoke with our good friend Ben Matthews of BM Fabrications & he fabricated a battery box the same shape as the oil tank with a tray in the top to mount the m.unit. He then fabricated a steel seat pan ready for the bespoke seat Olly was having made. 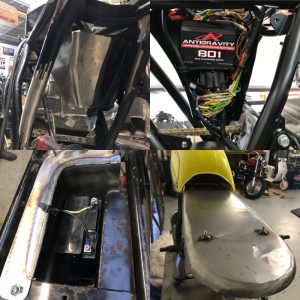 With the frame modified, Olly took it home in October 2020 to begin the process of having the frame painted & polished & then re-building the Honda.

Spring 2021 came along, but due to continuing issues with Covid restrictions & delays with parts due to Brexit & Covid; it was not until June 2020 that Olly returned to the mono motorcycles with a fully built bike.

It was really impressive & a testament to how important forward planning is when completing a custom project. 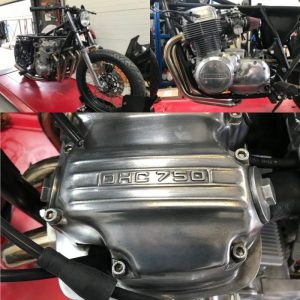 Now we had a rolling chassis, it was time to make sense of the wiring requirements of the CB750.

NB: The Honda had already had it’s entire wiring loom carefully removed at the point it was stripped.

Olly’s initial plan was to do away with the points & he therefore provided us with a Dyna ignition system.

Once Daniel had removed the cover, points plates, wiring, bob weights & cam, he then replaced the cam with the Dyna magnet housing. Having checked to make sure there was movement, he refitted with touch of Loctite.

Not happy with the Dyna plug, Daniel cut it & heat shrank the wire so it was black to match the braid.

Once the ignition system was in place, Daniel began the task of extending the rear brake light switch wires, removing the starter motor to make a new cable & extending the oil pressure switch wire.

Daniel then fabricated a part loom from the stator to the regulator rectifier. Once the part loom for the charging system was in place, Daniel then made the entire loom front to rear of the Honda. Once all of the wires were carefully in place, each wire was labelled carefully, heat shrunk & braided. 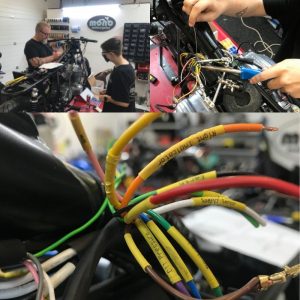 Once the wiring loom was starting to take shape inside the Honda, Daniel then drilled the oil/battery box for cabling. Having labelled all of the wires from the engine & regulator rectifier, he then removed the battery box & mounted the battery, m.unit & made a bracket to hold the starter solenoid. 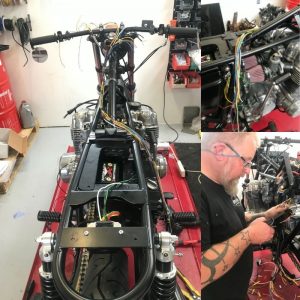 Once the m.unit was mounted, a loom was made for power, earths & switching, followed by making a loom for the m.unit. All of the wires from the regulator rectifier were then extended & labelled. 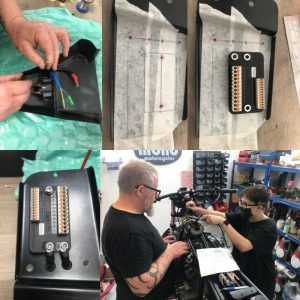 Daniel then made all of the connections inside the battery box to join all the wiring, made an earth lead & drilled the bottom of the box to run cables up inside.

At this point Daniel turned his attention to the handlebars. Olly had decided to run an m.button in the handlebars. The m.button allows a digital signal from the momentary push switches to be sent to the m.unit. 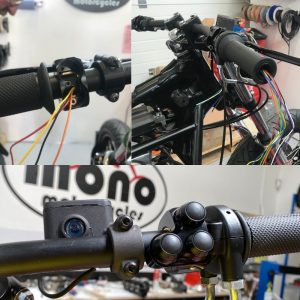 After Daniel had connected up the handlebar loom to the main loom, he tested the switches & nothing seemed to work. He checked the output from the bars, swapped the m.unit with another brand new unit & still nothing worked.

Daniel therefore removed the handlebars, replaced the m.button, rewired the dash/bars & made a new loom. Once connected, still nothing worked. Once Daniel had insulated the canbus wire from the bars to m.unit & still nothing worked, he knew it was time to take another route.

Once the dash was fitted, Daniel then set about fitting & re-wiring the regulator rectifier, drilling the frame & fitting the rear lights; he then connected the battery & tested the system. 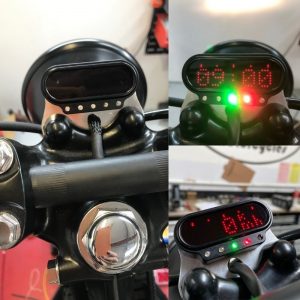 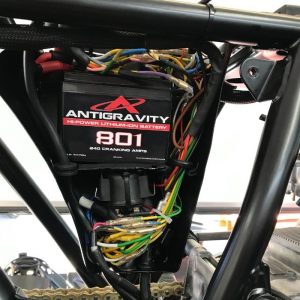 Once Daniel had refitted the battery box & added a charge lead, he then made a start tackling some of the mechanical elements Olly had asked us to address.

Having refitted the fuel tank & adding fuel, he discovered a fuel leak. Daniel removed the float bowls & adjusted the float levels in the carbs.

With the Honda running on the bench, Daniel discovered another small fuel leak which seemed to be coming from a pipe. With the pipe clips tightened, the fuel leak seemed to cease.

Once the speed sensor had been fitted, the Honda was road tested & the speedo was set up at the same time. The m.unit was set up through the mobile phone app & then we called Olly to let him know the Honda CB750 Café Racer was ready to go home. 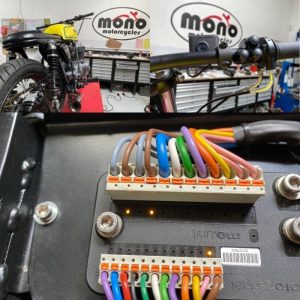 Everything was working perfectly on the road tests Daniel took the CB on around the local area & the Honda seemed to run well. However, once Olly started to ride the Honda home, it seemed to ride for few miles & cut out. Thankfully he hadn’t got that far & we managed to get the Honda back to the workshop.

So, what on earth was going on? As this was last thing on a Friday night, there was no way of knowing if it was fuelling, a coil breaking down or what could be causing the issue.

Therefore, in the evenings the following week, Daniel began testing all of the systems. All of the wiring was working perfectly, fuelling was OK & running on the bench for 20 minutes at a time, the coils were not getting hot.

It was at this point that Daniel started to consider if the new ignition system was causing a problem & or was faulty. Therefore, Daniel removed the new ignition system & replaced it with the original points. After many rides up & down outside the workshop to set the points gap correctly, Daniel then took the Honda out for a road test. The CB750 ran perfectly.

We left the CB overnight & road tested her again the next day. Again, running perfectly.

We spoke with Olly & he arrived to take her home.

Olly road the CB750 Café Racer all the way from our workshop in Funtington, Chichester to Southampton without the CB skipping a beat.

Despite us advising that the Honda would benefit from a rolling road session just to fine tune the running; the Honda CB750 Custom Café Racer is ready for the road. 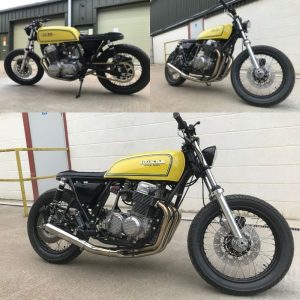 Olly is one of many of our customers who have truly dedicated time, effort & energy into not only researching their customisation options, but also being realistic about time frames, budgets & being open to alternatives. Olly has worked really hard to make the Custom Café racer not only look stunning, but he has also invested in the expertise he needed to assist with the project & the engineering & electrical materials to future proof the Honda.

Thank You Olly for allowing us to be part of the Honda CB750 Custom Café Racer journey with you.

If you are interested in a motogadget system for your Custom Motorcycle, please do email us at info@monomotorcycles.co.uk with information about your project, any photographs you may have & any thoughts about the customisation process you are undertaking. The earlier we at mono motorcycles can get involved in your project, the better.

Depending on each individual custom motorcycles needs, a full bespoke motogadget system can take from 20-30 hours depending on whether or not the bike is fuel injected or has carbs.

We look forward to hearing from you. All the best, Daniel Morris & Katy Mason at mono motorcycles