Sometimes the motorcycles who join us have considerable job descriptions & therefore can remain with us for a little longer than others. This past week has been just such an example of how this can happen.

On rare occasions we have motorcycles recovered to us by the AA or RAC.

The Ducati Scrambler was recovered to us with a rear puncture. Once the bike had arrived with us, the customer asked us to complete a service & replace chain & sprockets. Although the Ducati owner had never been to us before, he was so happy with the service we provided him, he was happy to say he was a customer for life. Happy to be of assistance. 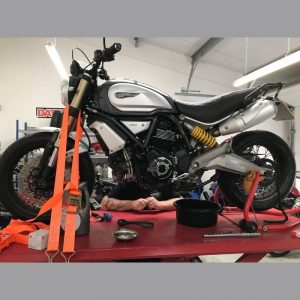 Our other Ducati has been with us a little longer, as she has had some considerable work undertaken.

The Ducati Diavel was originally booked in for a Major Service & professional detailing. Upon arrival, our customer asked if we could also replace the fork internals, as he was waiting for Andreani Misano Evo Cartridges to arrive. Although this of course was not a problem, we did have to wait for the internals to arrive & then re-book the Diavel for the following week. 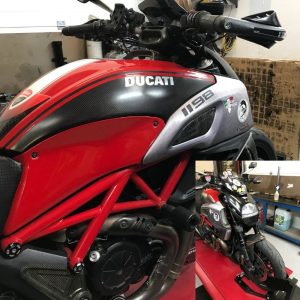 From strip down of outer panels, to completing most of the Major Service elements, including valve clearance check & cambelt replacement/timing, was 6 hours. By the time all of the components were refitted, all fluids, filters & plugs replaced, the chain was greased, brakes cleaned & refitted, all safety checks completed & all of the panels refitted; you are looking at approximately 8 hours non stop work. 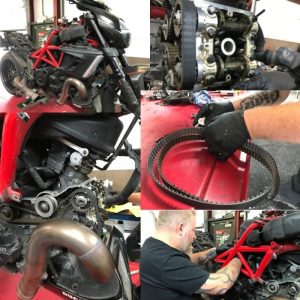 Once the Major Service was complete, the Diavel was steam cleaned before the panels were re-fitted to remove as much of the grease & road debris in advance of detailing.

One week on & we had the Diavel back on the ramp to replace the fork internals with the Andreani Misano Evo Cartridges. 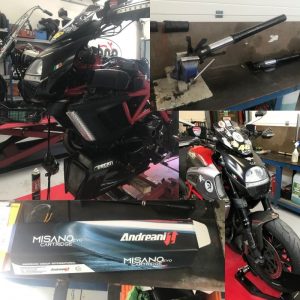 Once the forks were replaced & Daniel ran the Diavel up on the ramp, he noted a small fuel leak.  Having to strip down most of the bike again to gain access to the fuel lines, Daniel then found that one of the smallest seals on the injector had deteriorated over time & clearly by being disturbed during the servicing schedule, had then created a leak. However, once we had contacted Ducati, they advised that the seal comes as part of the throttle body assembly & you cannot purchase them separately. The seal is as small as a 5p piece! 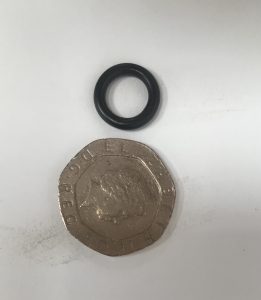 What is missed sometimes are the solutions technicians need to seek out to complete a job & in this case we are literally being held to ransom by something inexplicably small. We have also taken 3 hours of searching & contacting companies in the UK to try & source a suitable seal for the job. However, this now means that the Diavel will have to remain with us until we can rectify the issue.

This week we welcomed back the Triumph Tiger for Servicing, MOT & to assess a charging issue.

The Tiger had a new genuine stator & reg/rec replaced a couple of years ago & has done very little miles since then.

Our customer advised recently that with the lights on, the bike did not seem to hold a charge.

Under investigation & having bypassed the wiring loom; Daniel found that the wiring from the regulator rectifier was getting very hot, meaning that there was resistance building up inside.

Sadly, the wiring on the Tiger is beginning to show signs of ageing. When this happens wires can become brittle & crack, leaving minute lesions in the cables, which in turn can cause electrical issues to occur. The regulator rectifier having been damaged before Daniel bypassed the loom, was found to be the culprit for the charging issues. The stator, as can be seen from the photo, is absolutely fine.

Although the battery seemed to be holding some charge while it was on the bike, off the bike for 24 hours, it went completely flat.

We have spoken extensively about how sensitive batteries can be & that unseen internal damage to the cells, can cause a battery to fail at any point, regardless of age.

We have even had dead new batteries straight out of the box in the past. It is rare, but if a cell is already damaged perhaps due to having been dropped or the connections inside are faulty; this can cause a battery to fail.

Once the regulator rectifier was fitted to the Tiger, Daniel was then able to test the wiring again. With a new battery fitted alongside all of the other new parts, the Triumph was charging at 14.3v & 13.9v under full load. 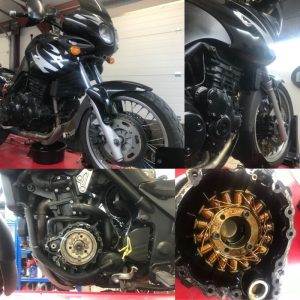 The Yamaha XS came to us some time ago now & sadly has had a lot more issues than we could have originally foreseen.

After resting for the past few years, the XS was put away with an intermittent electrical fault. However, residual fuel in the carbs (despite the tank being emptied) had destroyed all of the innards of the carbs & everything was blocked with very stale, gone off sticky fuel.

Daniel has also addressed some electrical inconsistencies with the wiring, where ageing wires & home-made repairs have caused damage to the wiring. Once we are able to get the XS out on the road, Daniel’s suspicions about the status of the crank shaft position sensor might be realised & this could have been what was causing the intermittent fault before she was rested. 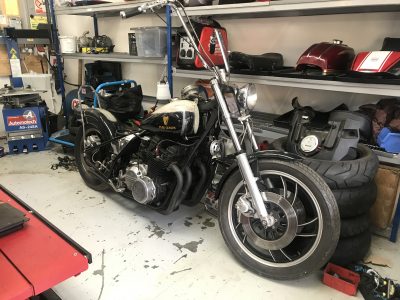 The Honda 400/4 originally came to us for a re-wire. However, upon arrival the customer advised that although the bike had been a running bike last May, when they tried to turn the Honda over before it came to us, it seemed to have lost it’s spark.

We knew ahead of time that someone had in the process of re-wiring the Honda during it’s rebuild “get lost along the way re-connecting wires” therefore the Honda needed re-wiring.

Therefore, Daniel & Nathan stripped out the old wiring loom & re-created a new loom on the bike. However, once this was completed, Daniel then set about investigating the no spark.

Daniel first of all found that one of the main fuses had been incorrectly replaced whereby a 15amp 12v fuse was added, where a 7amp 12v fuse should have been. If there was a an issue with the circuit, the fuse may not have blown & may have set fire to the wiring loom.

Concerned that this might have sent the incorrect currents to the coils, Daniel then tested them. However, it was only when he really looked at them that he realised they had no earth! The coils had been screwed directly into the paintwork of the frame & not made connections to the metal, therefore not creating an earth point. This means the coils were not earthed.

Under further investigation, Daniel found that the points gap was far too wide to create a spark & that the condensors have burnt out. All of these issues will have built up to make the Honda loose it’s spark & simply not run properly.

Having been given the go ahead to purchase new points, condensors & some new plugs; the Honda will hopefully be running by the end of next week. 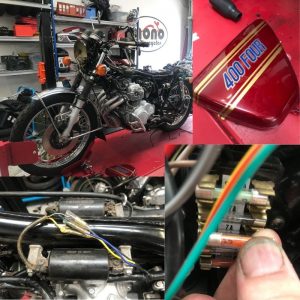 Axle did not have the best start in life having been abandoned as a surplus to requirement street puppy on the Romanian streets. But thanks to the dedication of Jackie Turner & Mioritic Dog Rescue/Pounds Fur Paws Axle was saved from the streets & to be honest goodness knows what fate, at about 2-3 months old & he joined Sprocket & our family just before Christmas 2020 when he was just 4 months old.

Axle is the gentlest soul, but he still has echo’s of his life on the Romanian streets & those who know him can see that sometimes. Time, we hope, will heal those mental wounds, drive away his demons & allow him to settle because to be quite frank, we love him & Sprocket to the absolute moon & back. 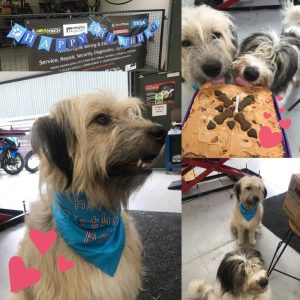 We are really excited to announce our Christmas Charity Quiz in aid of SERV Blood Runners is back this coming December. We have supported SERV as one of our nominated charities since 2018 & are happy to be able to help raise much needed funds for them whenever we can.

Therefore, put a save the date on your calendar for Friday 3rd December, 7-10pm & we will announce later in September when tickets will go on sale. 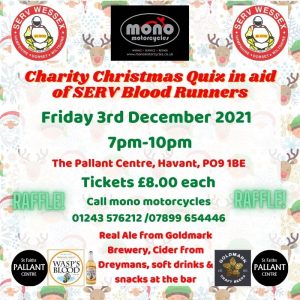